BenDeLaCreme on the future of Drag Race, All Stars 4, and her thoughts on RuPaul’s apology… 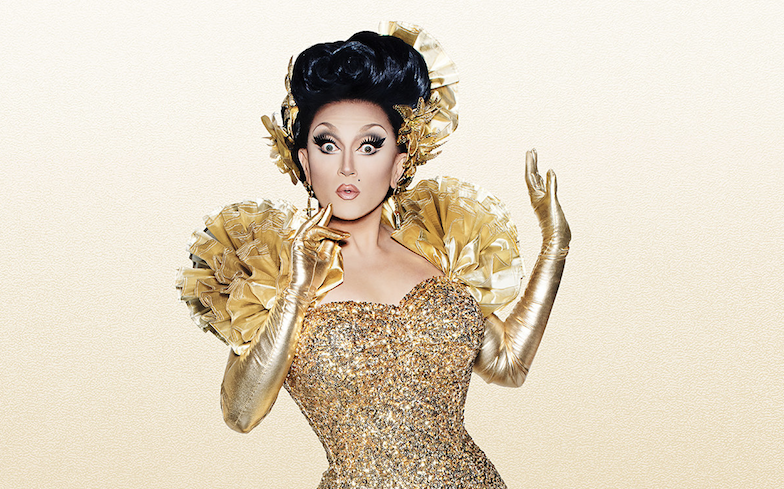 BenDeLaCreme spills all the T in this exclusive interview with Gay Times.

Earlier this month, the terminally delightful BenDeLaCreme provided Drag Race fans with one of the most controversial and gag-worthy episodes in its entire 12 season run.

The season six fan-favourite won her record-breaking fifth challenge, and left the judging panel – and us – positively cooped and mother-tucking gooped when she opted to eliminate herself instead of a queen in the bottom three.

Her reasoning? She already felt like a winner – and do you blame her? Ben won an unprecedented five out of six challenges, became the only queen to win Snatch Game twice, and the queen with the most challenge wins ever at seven. She may have not snatched the crown, but henny, she’s certainly cemented her legacy as one of the most talented Ru queens evaaah!

Here, we sit down with Ben to discuss the future of Drag Race, who she wants to slay All Stars 4, and her thoughts on RuPaul’s apology…

What kind of positive reactions have you received since quitting the show?
I mean, call it what you want but the word “quitting” doesn’t ring true to me. It didn’t come from a place of defeat. And the reactions have really reflected that. A lot of people seem really touched by the idea that you don’t have to play by the rules just because someone in a perceived position of authority presented them to you. You set your own standard for success, no one else can. I’ve been hearing over and over that that message is inspiring and empowering to people.

How have the negative reactions affected you?
As far as what’s reached me, the negative has been kind of drowned out by the positive. But what I do see for the most part just misses the above point – and if they didn’t get it they didn’t get it. At the end of the day, as Ru says, “What other people think of me is none of my business.”

At your viewing party, you said you would’ve sent Kennedy home. How did you come to that decision?
Well – I actually said I wrote my name on her lipstick because I was afraid the producers would stop me from doing what I was doing. Statistically she had been in the bottom most, so that seemed the fairest if it came to that. But the reality is that no matter how much people want things to be black or white, there is no objective “fair” and there is no objective right or wrong choices. Which is why I decided I no longer wanted it to be up to me.

Did you speak to Kennedy about it afterwards?
You are really looking to stir up the drama I said I was done with, huh? What are your thoughts on Bebe not showing her lipstick?
Bebe does what she wants. She wrote a song lyric that went “Rakakakakakakakaka.” Get your life, Bebe.

You were stood next to her. Do you know who she picked?
I don’t. We all know much less than audiences presume. No one, including Ru or any of the girls, knew what my lipstick said either.

Judging by your experiences in the workroom and on stage this series, who do you think deserves to win?
If I had a strong opinion on that I’d still be there. All these girls are mega talented in different areas. If it’s a dance competition, Kennedy would take it home. Stand up? Trixie. But it’s a drag competition, and drag is not one thing, so it depends on what the judges are looking for at that moment, that’s why past winners have been so diverse.

Was there anything not caught on camera that you wish the fans could’ve seen?
I wish they could have seen the close bond I formed with Kennedy over time. I didn’t know her starting out, but she earned a ton of my respect while there. We are very different, but I really like her.

Who do you keep in touch with the most from AS3?
Trixie and I talk on the regs. Like we text all the time but she is one of the only people I know who really likes to pick up the phone and talk. And I love it – there’s a lot to talk about while on this wild ride. And she gets me. We were friends before Drag Race, but this has brought us a lot closer, and I know that we will remain that way.

What are your thoughts on RuPaul’s apology regarding his comments on trans contestants competing on Drag Race?
I think that queer culture has always been at the forefront of growth and change. Drag is, in part, about malleability and adapting. You have to be grounded in the present and ready for the future. Ru has always embodied that. For someone as established as she is to say “these are the thoughts I’ve had in the past, but I can have new thoughts. I am open to looking at things in new ways…” well, I wish more people would think that way. I’m excited to see where it leads. Who is the one to watch on season 10? Who should we be keeping our eye on?
I actually don’t know a lot of these girls. I’ll be learning what they bring right along with everyone else – but I’m excited to see it!

Who do you think deserves to be on AS4?
Gia Gunn, Peppermint, Jiggly Caliente, Carmen Carrera, Sonique, Monica Beverly Hillz, Stacey Lane Matthews, and Kenya Michaels.

How much longer do you think the show will go on for?
This show has long legs. As long as our society needs it, it will thrive. And our society sorely needs it.

If so, who should be his replacement?
I think it would be important to have another queen who has been part of the drag legacy since before the show began… Peaches Christ, Coco Peru, Varla Jean Merman, Lady Bunny… all would be amazing.

What does the future hold for BenDeLaCreme?
Well, I’ll be touring my one woman show “Inferno A Go Go,” as well as starring in Peaches Christ’s “Drag Becomes Her” with Jinkx Monsoon. I’ll be remounting my play “Beware the Terror of Gaylord Manor” this fall in Seattle, and touring all over the US, Canada, the UK, and Australia over the coming months! I’m one lucky gal.

The Drag Race All Stars 3 finale airs this Thursday (15 March) on VH1 in the US, and Comedy Central in the UK.