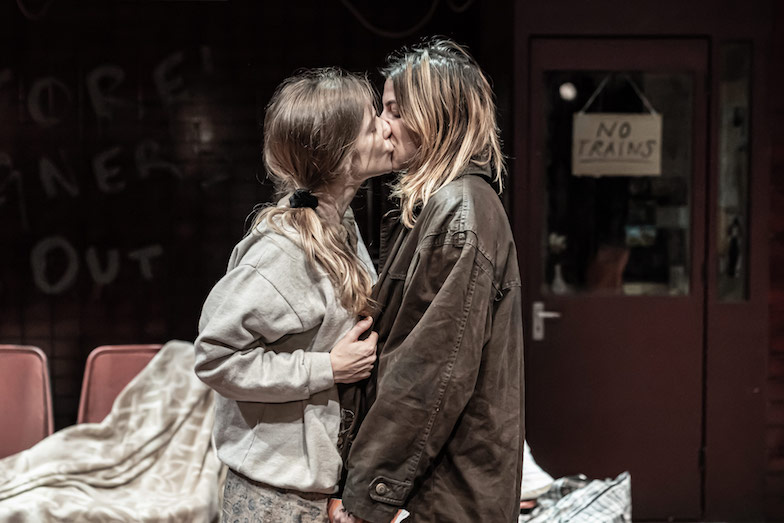 25 years on from its debut, David Greig’s prophetic play has been revived at the Donmar Warehouse, directed by Michael Longhurst.

This revival of Greig’s work could not feel more timely. Originally written in the context of the breakup of Yugoslavia, we are presented with a vision of a tense and divided Europe. Sava and Katia are refugees fleeing an unnamed war – presumably Bosnian – and have set up camp in a now-defunct railway station in a former border town. Unsurprisingly, the townspeople have a variety of opinions on the new arrivals. The play was originally set in Mittel Europe but now feels more like Middle England, complete with Yorkshire accents.

It’s a show full of clever references and thought-provoking observations. There’s a smart Beckett reference when the refugees realise they are waiting at a station where trains no longer stop – they’re literally waiting for nothing. One particularly poignant moment saw one of the refugees reassuring the other that because they were still in Europe, everything would be okay – which led us to wonder whether we still were, and if everything would work out okay for us.

There’s some impressive acting on display here. Ron Cook is entertaining as the stationmaster and manages to inject some much-needed moments of humour into the script. Shane Zaza, as the charming yet vulnerable Morocco, delivers a strong speech about the borders being magic money lines, complete with some neat visual trickery. Billy Howle also impressed as Berlin, with his politics shifting ever further to the right and descending into anger and violence following the loss of his factory job.

Although Europe has plenty to recommend, we did feel there was a bit of a pacing issue. The second half is punchier and has an incredibly dramatic conclusion, but the first act is a slow burn – it takes a very long time to establish the setting and characters, with little actually happening until just before the interval. It’s not a deal-breaker, but a bit disappointing in the context of an otherwise impressive play.

Don’t let that put you off, though – Europe is an intelligent and thought-provoking piece of theatre, and this new production is full of clever moments and impressive acting. We’d absolutely recommend a visit to the Donmar Warehouse to check out this powerful and timely revival.