Eugenius! is a retro slice of ’80s camp fun – review 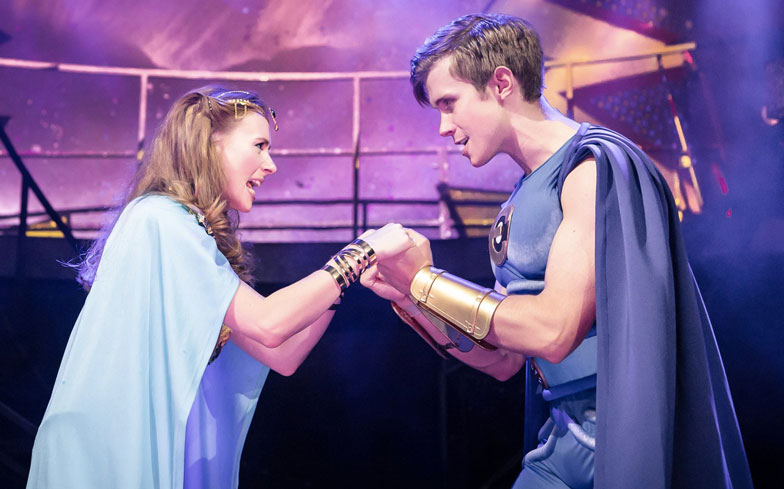 The sci-fi superhero musical, written by Chris Wilkins and A1’s Ben Adams, has returned to The Other Palace theatre following a successful run earlier this year.

For those who missed it first time around, Eugenius! tells the tale of geeky teenager Eugene, who has a knack for writing and illustrating comic books. His talent is spotted and he’s whisked away to Hollywood to create a film based on his comics. Alongside Ben Adams, a number of well-known names are involved in the show’s creation – Warwick Davis is the show’s producer, Aaron Renfree the choreographer and there is voice-over work from Brian Blessed.

It gets a lot of things very right. For the most part we really liked the songs – they have a high-camp ’80s retro vibe throughout and there are some memorable melodies. We found ourselves humming the main theme song long after we’d left the theatre. Rob Houchen as Eugene is superb and has an impressive voice; Laura Baldwin as love interest Janey and Daniel Buckley as friend-without-a-filter Feris both put in strong, humorous performances; and Scott Paige as Theo injects regular doses of wonderfully camp comic relief. The ensemble cast, too, provide some excellent backing vocals and sharp choreography.

Review: The Rise and Fall of Little Voice tells a poignant and uplifting tale – review

It’s not perfect, however, and we did have some issues with the plot. It’s about as predictable as they come – our protagonist sets out on a quest to find the hero inside himself, save the world and win the girl. Originality is not this show’s forte – it’s choc-full of cliches and cheesy one-liners. There were a handful of scene changes that didn’t feel as slick as they should have been and one or two of the jokes didn’t land.

Having said that, Eugenius! is difficult not to like. Yes, there are flaws – the pacing seems off, with a clunky slow start and far too much happening in the second half; the ending is entirely predictable; most of the songs are great, a few are forgettable. Yet it’s performed with so much joy and energy, and tells such a daft and enjoyable feel-good story, that only the coldest of hearts wouldn’t be warmed. A great fun night out.