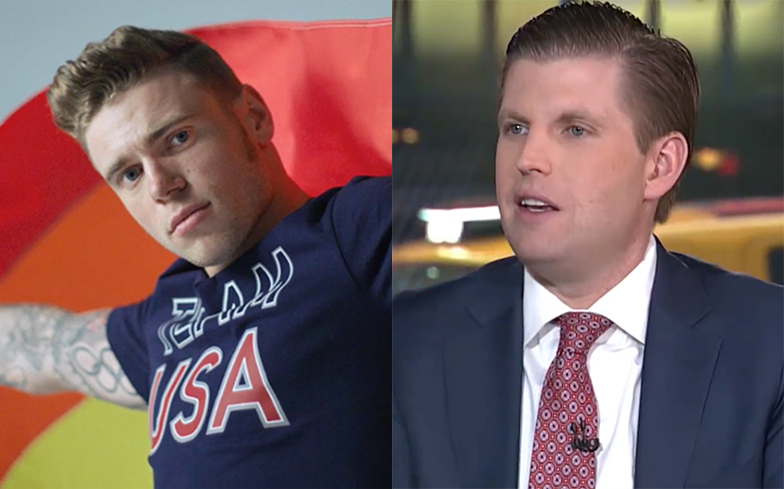 Eric Trump blasted out athlete Gus Kenworthy for comments he made about Ivanka Trump earlier this week.

Eric Trump has called Gus Kenworthy “disgusting” for his tweet about Ivanka Trump.

Earlier this week, the out athlete shaded the hell out of Donald Trump’s daughter, after she attended the Winter Olympics Closing Ceremony in Pyeongchang.

He tweeted: “So proud of all these people! Everybody here has worked so hard to make it to the Olympics and have the opportunity to walk in the closing ceremony! Well… Everyone except Ivanka. Honestly, tf is she doing here??”

Eric hit back at Gus during an appearance on Fox & Friends. When asked about the freeskier’s comments, he said: “It’s gross. It’s disgusting. Ivanka’s beautiful. She’s elegant.

“She was an incredible representative of this country and we should be very proud of her.”

He then compared Ivanka with Obama’s daughters: “Can you imagine if Sasha or Malia went over to the Olympics and said that about them? That’s not what the Olympics is about.”

The 26-year-old clearly has no qualms about who he offends.

Last year, he said he would refuse an invitation to the White House while Donald Trump is president because of his “direct attack on the LGBTQ community”. Then, he threw some epic shade at Mike Pence because of his anti-LGBTQ track record (yaaas).

Now we’re just waiting for him to shade Eric… Gus went viral this month after he shared a kiss with his boyfriend Matthew Wilkas – a cute moment that was captured live on camera.

Following the event, Kenworthy told The Guardian: “I didn’t even know that that was a televised moment at all, but I think that’s amazing.

“And so to be able to do that, to give him a kiss, to have that affection broadcasted for the world is incredible.”

He then continued, saying: “I think that the only way to really change perceptions, break down homophobia, break down barriers is through representation. That’s definitely not something I had as a kid.

The 2018 Winter Olympics concluded on 25 February.