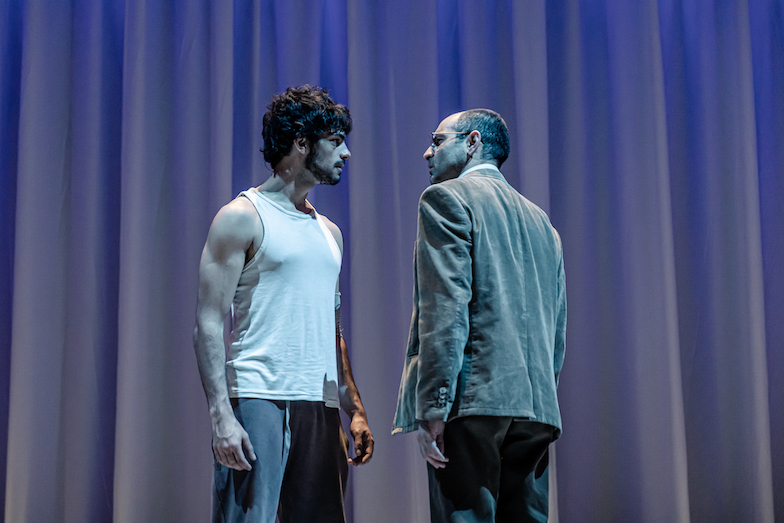 The English Touring Theatre and Theatre Royal Stratford East’s remarkable revival of the tale of man and horse has opened at Trafalgar Studios.

It’s been 12 years since Equus last graced the West End stage, with the 2007 production causing a flurry of media excitement, starring Daniel Radcliffe in the lead role during the height of his Harry Potter fame. Time may not have been kind to Peter Shaffer’s 1973 work – the language seems laboured in places, while the psychology feels dated and full of clichés – but this version, with director Ned Bennett at the reins, has breathed new life into the text, making it feel shocking, compelling and painfully relevant.

The subject matter is challenging – it follows the story of 17-year-old Alan Strang (Ethan Kai), an unstable young man who has been spared jail for maliciously blinding six horses and has instead been sent into the care of child psychiatrist Martin Dysart (Zubin Varla). The doctor, facing the ‘menopause of his career’, struggles to reconcile his drab existence with that of the boy who is evidently living a more exciting – if evidently troubled – life.

It’s an extremely compelling piece of theatre – one which grabbed our attention from the opening scene and never let go. There are too many brilliant and shocking moments to name them all, but we’ll highlight a handful. The horses are deftly depicted – there are no masks or outfits here, just a couple of extraordinarily muscular men delivering some mesmerising physical theatre, writhing masses of sweat and sinews. The intelligent use of lighting and sound to create dream sequences works brilliantly and integrates seamlessly with the rest of the action.

There are some wonderful twists and turns in the story, too, which features a deliciously deviant sense of humour. We won’t spoil any of the surprises, but there are some delightfully awkward encounters, particularly in the second act. It’s all held together by a talented cast, with impressively strong and versatile acting throughout.

It’s difficult to find fault with this revival of Equus. While the original text may not have aged brilliantly, Ned Bennett has done a remarkable job of making this 1973 work feel exciting and relevant. It’s a scintillating ride through Peter Schaffer’s equine psychodrama – not to be missed.