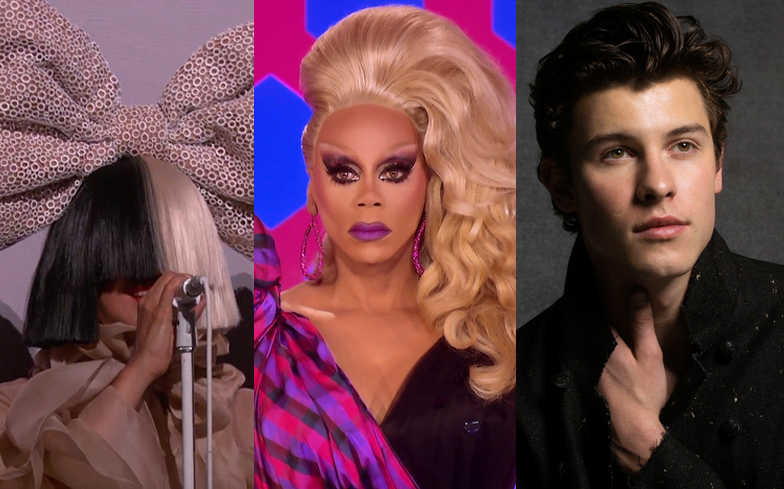 This week we have the sickening start of Drag Race season 10, a soaring new Sia bop, and a new Netflix documentary series to binge on.

That’s your weekend plans sorted, then… Gentlemen, start your engines, because here we go for another season of RuPaul’s Drag Race. Celebrating its 10th year, the opening episode features plenty of familiar faces from previous seasons back to judge the new crop of 14 queens vying for the title of America’s Next Drag Superstar. Oh, and Christina Aguilera has the most iconic runway entrance in the show’s Herstory.

With a new extended running time of 90 minutes, and companion show Untucked back on our screens, there’s more sickening antics than ever before.

RuPaul’s Drag Race airs on VH1 in the US, and is available to stream on Netflix in the UK.

Shawn Mendes – In My Blood

The Canadian heartthrob is back with another stomping stadium-sized anthem, but this time he’s digging deep. The 19-year-old co-wrote and co-produced his new track, saying that it’s the most honest he’s ever been on a song.

Surging guitars and Shawn’s raspy vocals make it an electrifying and emotive effort. If this is a sign of things to come, album number three is gonna be a goodie.

This is some mini-game mayhem shiz on another level, hennies. Making full use of PlayStation 4’s PlayLink feature – where gamers can connect to their consoles via their smartphones to use them as controllers – this series of 15 madcap challenges will fully engage your competitive side.

Swipe, tap, and shake your way to victory, and every now and then you’ll even get a call from the crafty Fox to help eliminate the competition. It’s multi-player madness that’s incredibly addictive.

Back in 2011, David Guetta kept Sia on his production of Titanium, catapulting her career into the upper echelons of the Top 40. The Aussie singer-songwriter has since enjoyed some of the biggest pop hits of her career. Here, on new collaboration Flames, Guetta and Sia create yet more magic.

An airy chorus is flanked by a strutting beat and funky guitar plucks, while Sia’s soaring vocals bewitch us all over again. Be ready to have this on repeat for some time.

We’re a sucker for a walloping, blockbuster sci-fi, and that’s exactly what Pacific Rim: Uprising is. Although Guillermo del Toro hasn’t returned to direct this sequel, he is in the producer’s chair making sure it stays in line with his 2013 outing.

All is as expected: massive monsters and rollocking robots battle it out for mammoth action sequences, while Star Wars actor John Boyega leads the cast. Set 10 years after the first instalment, the world is under attack again, but this time the brawls are bigger, badder and slightly more bonkers. It’s out in cinemas today.

Jay Z and Beyoncé – On The Run II

Catch them while you can, because music’s premier power couple Jay Z and Beyoncé are On The Run again. The superstars will be headlining stadium across the globe this summer, performing a show packed with their platinum-shining discographies. Expect killer vocals, fierce choreography, iconic visuals, and if their first on the On The Run, erm, run is anything to go by, possibly a few very special guests. Tickets are on sale now.

If you are one of approximately three people who didn’t catch Star Wars: The Last Jedi before Christmas, then your time has come. The eighth instalment in the sci-fi saga sees Rey confront her full potential, Kylo Ren being the complex villain the series needed, and the long-awaited return of Luke Skywalker.

It’s also Carrie Fisher’s final outing as General Leia, and what a swansong it is. So if you haven’t seen it yet, get on board. And if you’ve already watched, it’s time to binge on the home release.

Star Wars: The Last Jedi is available now as a digital download, and will be released on DVD and Blu-ray (they should’ve marketed it as a Blu-Rey tbh) on 27 March.

Netflix have a reputation for releasing a documentary series that captures the viewers’ imagination and gets them talking by the water cooler about it for weeks. Their latest is Wild Wild Country, which looks at the hidden history of Indian mystic Bhagwan Shree Rajneesh and the spiritual movement he founded in the 80s.

His following left their homes to create a utopian city in Wasco County with him, but Wild Wild Country shines a spotlight on how it all fell apart, and the darkness and violence that ensued. It’s a fascinating insight to a cult movement that time had all but forgotten.

All six episodes are available to stream on Netflix now.