ENO’s The Turn of the Screw a dark, haunting production – review 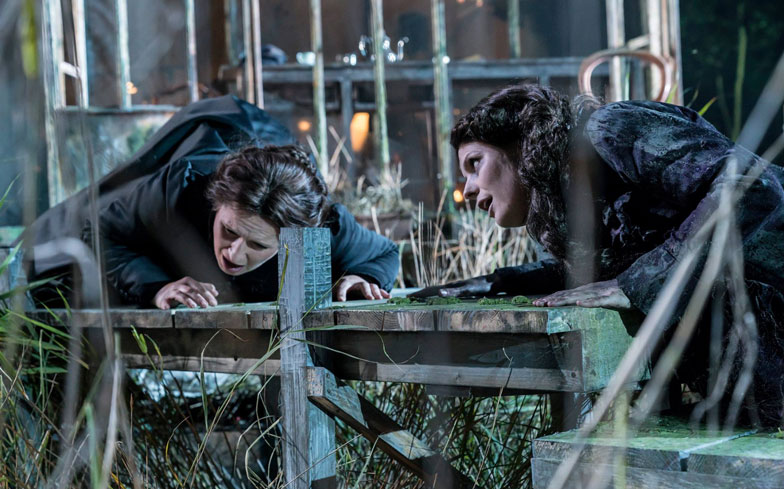 The Turn of the Screw tells the story of a governess who arrives at a country house to take charge of brother and sister Miles and Flora. Shortly after she arrives, the governess starts to see visions of a man and a woman roaming the estate. She learns from the housekeeper that two former employees of the estate, Peter Quint and Miss Jessel, had been having a sexual relationship – tellingly, this Miss Jessel is heavily pregnant. While their involvement with the two children is not made explicit, the implication is that they have stolen the children’s innocence.

The setting for this show could not be more perfect; the Open Air Theatre is a glorious space on a warm summer’s evening. The dilapidated glasshouse looks wonderful and the grass surrounding the stage doubles as the grounds of the estate. The start time of the play has been moved back slightly to coincide with the best of the sunset and it’s extremely effective – the tone of the play shifts from light to dark as dusk falls and darkness descends on the theatre.

While this is a relatively accessible opera – it’s just over two hours long, including interval, and based on a fairly well-known text – it still demands undivided attention throughout. Additionally, Britten’s music is not the easiest to listen to, with an interesting approach to tonality. For those unfamiliar with the narrative, copies of the libretto are available and we would strongly recommend using them.

Related: Watch new LGBTQ musical film How The Moon Fell From The Sky

While we appreciated that this rendition of the tale was more of a psychological drama as opposed to a ghost story, we still considered it to be remarkably light on scares. Although the final scene, accompanied by a descent into twilight, is a little more sinister, this change in mood is only really palpable at the tail end of the performance and we’d have liked it a little sooner. The ghost characters, too, weren’t entirely convincing – they were creepier when we couldn’t see them. In the flesh they appeared a little too pantomime to be genuinely scary.

There is still plenty here to recommend. The quality of the music is excellent, with a talented orchestra partially concealed within the house. The singing is impressive throughout and the theatre space is used effectively – we particularly enjoyed the added drama of characters entering and exiting at various different concealed entrances throughout the venue.

The Turn of the Screw is an interesting piece; it’s a dark and haunting production quite unlike the majority of this summer’s programme at the Open Air Theatre. It’s impressively staged and sounds great, but do be warned that it’s not a sit-back-and-relax kind of show – it requires absolute concentration throughout. There’s enough here to enjoy, but this night at the opera is something of an acquired taste.