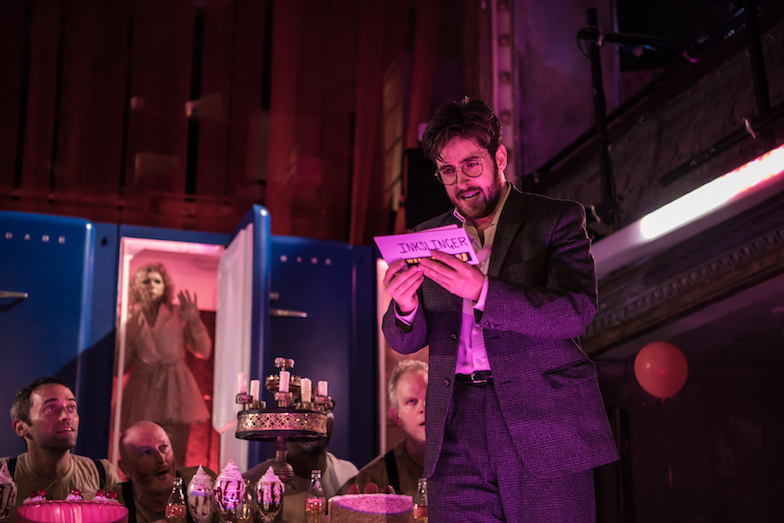 Paul Bunyan is quite frankly a bizarre proposition. Based on the American folklore tale, it tells the story of Paul, a giant lumberjack who befriends a blue ox called Babe; together they set out to clear forests, making way for the American Dream. Paul remains unseen throughout – voiced by Simon Russell Beale, he is represented by a neon sign and dispenses pearls of wisdom to his motley crew of singing lumberjacks. On their journey they’re accompanied by a trio of geese, two cats and a dog, and two cooks who specialise in soup and beans.

Bizarre is probably an understatement, and yet it all works surprisingly coherently. It’s a very accessible work – stylistically it feels a lot more like a contemporary musical than a traditional opera. This is no coincidence – when it debuted in 1941 both Britten and librettist W H Auden were living in the USA to escape the war, and were undoubtedly influenced by the increasing popularity of new musicals on Broadway. Lengthy laments are replaced with shorter, catchier tunes, featuring noticeable jazz and blues influences.

It’s a much more fun and youthful show than we’ve come to expect from ENO and one that suits the talented, young cast. Director Jamie Manton and designer Camilla Clarke have made the most of this stunning but unusual space, too. The Alexandra Palace Theatre – lovingly restored last year after 80 years of neglect – is a far cry from the company’s usual home, the grandiose Colisuem.

The costumes are imaginative and there are plenty of choreographed numbers, providing the audience with an energetic and colourful spectacle. All areas of the venue are utilised, with the orchestra positioned behind the main stage, while the company come out into the stalls and up on to the balcony to deliver their performances, creating a surprisingly intimate and immersive experience.

There were a couple of misfires during the evening. We weren’t always sold on some of the too-literal mime during the choreographed moments, while on occasion we thought the performers were trying just a little too hard for laughs. It was a lighthearted and amusing performance anyway – we felt a couple of attempts at comedy just felt forced.

Overall, though, we thoroughly enjoyed this revival of Paul Bunyan. As we’ve come to expect from the ENO, the quality of the musicianship was absolutely first-rate throughout. It may be unusual and not all that well known, but Britten’s first foray into the world of opera provided us with an entertaining night out.