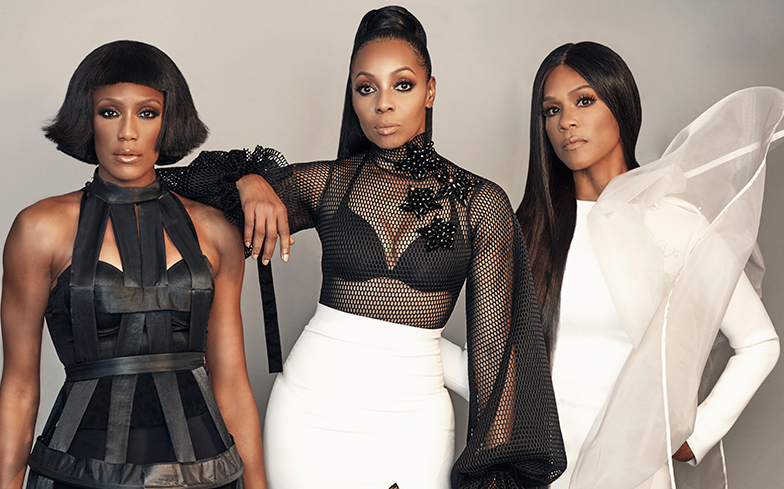 En Vogue are one of the longest running girl groups of all time, and it’s not hard to see why.

With a back catalogue of hits, an unapologetic attitude towards female empowerment and equality, and a clear influence on millennial bands like Little Mix and Fifth Harmony, they’ve managed to stand the test of time where others have failed.

As they prepare to head out on tour, Gay Times spoke to founding member Terry Ellis about relevancy in the age of social media, the group’s love for RuPaul, and the release of their first studio album in 14 years…

Why did you decide that now was the right time to release a new album?
I wouldn’t say it was necessarily us deciding that now was the right time, it was more so the time that chose us. Everything just sort of fell into place. We’ve always been recording and we’ve never stopped working, but all the pieces to the puzzle just fell into place, meaning we got the right partnership with eOne Music and new management, who are fantastic, and just the right combination of songs. It all came together, and it’s been great.

What can you tell us about the sound of the new album?
We worked with our original producers Denzil Foster and Thomas McElroy, but we also worked with Raphael Saadiq, Curtis Wilson, and a hot new producer by the name of Dem Jointz. You’re still gonna get the signature En Vogue harmonies, but you’ll get an eclectic range of music as well. You’re gonna get that R&B soul, and a little bit of funk. I think you guys are gonna enjoy it!

En Vogue have been going for almost 30 years now, but most girl groups don’t last that long – what do you think is the key to your success?
I think gratitude and an appreciation for what we do, and the continuous opportunity to do it, you know? We’ve never stopped working and it’s always been our drive and passion. It’s the love for what we do that keeps us going. I think it’s all those elements that have kept us relevant too, because we’ve grown with the times.

Little Mix covered one of your songs on the X Factor and went on to become huge – are you aware of the impact you’ve had on pop culture?
We are becoming more and more aware of it, especially during this time and being female, and it’s been really great because as an artist you only hope that through your music you’re able to inspire and uplift and motivate. So it’s been really, really awesome and we’re very humbled and honoured by it.

Speaking of impact, two of your songs have been lip synced to on RuPaul’s Drag Race. Have you seen that?
No! That’s pretty awesome. Oh my gosh, I’m going to watch that. We love, love, love RuPaul! He’s the sweetest person. We gotta find this…

What kind of challenges have you faced making new music this far into your career?
I would say the only challenge that we’ve faced releasing music is past relationships with labels that wanted to be involved with the creative process, so much so that they didn’t really get us, which is why I said we finally found the right partnership with eOne Music, because they didn’t get involved in our creative process, they loved our project and they said, ‘Let’s go, let’s rock!’

You’ve had plenty of hits, but is there a specific song that means the most to you?
There’s so many, I gotta say all of them! But maybe the more socially conscious songs like My Lovin’ (You’re Never Gonna Get It), which is about being a woman and demanding respect, or Free Your Mind, which is about the discrimination that we have all experienced in our lifetimes. And it’s not just racial discrimination, it could be someone not liking you because of a handicap, or because you’re gay, or because of whatever – discrimination is discrimination, and that’s what that song is about. So especially those songs.

The #MeToo and Time’s Up campaigns have been sweeping through Hollywood, with a lot of women speaking out about the discrimination they’ve faced. Do you think the music industry needs a moment like this?
Well, I think that’s a great question, [but] I don’t think that the music industry hasn’t had a moment like this. You to have to go back and listen to an artist and their music, and I’m saying that specifically because Free Your Mind is about that. That song was written from each girl’s experience of discrimination, of prejudice, something we’ve experienced in our lives, and I think the difference is that it seems louder within the movie and television industry because you singlehandedly have women on a panel, or speaking out on television, or speaking about their experience, whereas with musicians, we’re singing about it, we’re writing about it through song – it’s a different way of expressing it.

You have a lot of gay fans, what do you think is it about En Vogue that appeals to them?
I think it’s the fact that we’re outspoken women, and we’ve written about those experiences with discrimination. Even though we’re women, they realise that we go through the same kind of things that they go through, and we were bold enough to be inclusive through our music, and we’re speaking for everyone.

What impact have gay fans had on you and your music?
I would say the same thing, because speaking loud and being bold, and not being afraid to be who you are, and loving yourself no matter what anybody else thinks or says, and standing strong and saying, ‘You know what, get over it, because I love myself’ – that, for us, is so encouraging as women, and having been discriminated against as women. That speaks loudly, and I think that’s the synergy that we have, that we get to exchange those experiences and that energy with each other.

En Vogue’s new album Electric Café is due out on 6 April, and is available to pre-order now