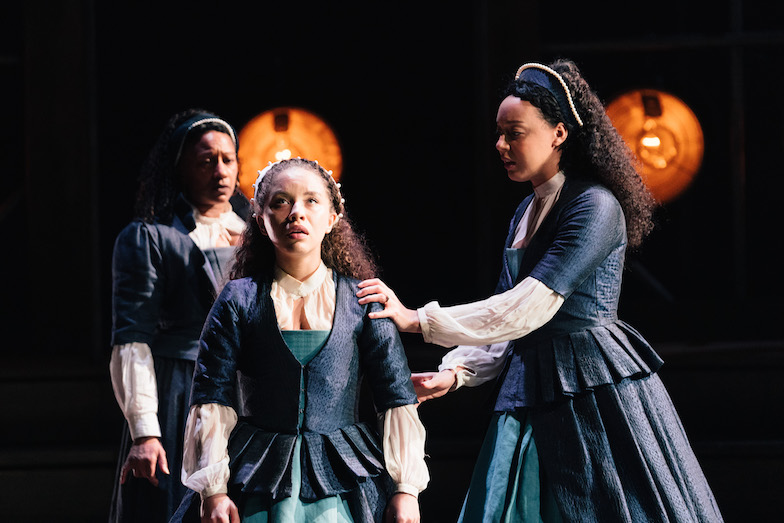 Morgan Lloyd Malcolm’s new play, which debuted at The Globe last summer, has transferred to the Vaudeville Theatre in the West End, directed by Nicole Charles.

Emilia Bassano may not be a household name, but perhaps it should be. She was one of the first English women to have a book of poetry published; she was also a teacher and a feminist – and, arguably, one of Shakespeare’s muses. Born in Bishopsgate in 1569, she was a talented woman whose ambitions were thwarted simply by being born into a world which was run exclusively for men.

As a play which explores many of the issues which women face in society, it seems fitting that there is an all-female cast. In this show, the part of Emilia is played by a trio of women – Saffron Coomber, Adelle Leonce and Clare Perkins – at varying stages of her life story. It’s a device which generally works well, but at times we did find our protagonist somewhat contrived. There were moments when her character felt more like an all-too-perfect feminist hero rather than an actual person.

Herein lies the problem with Emilia – it sounds like a great idea on paper, and it certainly has lots of interesting and important things to say, but it frequently doesn’t say them terribly well. It’s really lacking in subtlety – points are often made very loudly and directly. There’s little in the way of character development, so as we don’t really get to know the key players in the story, there isn’t much room for nuance in the performances. Far too many key moments are delivered didactically – in places it’s akin to attending a lecture.

There are also serious pacing issues – it weighs in at two and a half hours, struggling to keep momentum, especially in an over-long first half. It has some strong moments – the play-within-a-play conclusion to the first act was entertaining, the washerwoman scene was genuinely very funny, and a barnstorming final speech at the play’s conclusion raised the roof. But a handful of impressive moments don’t make a great play, and there are serious dips in momentum in-between.

It’s disappointing, as Emilia has many of the ingredients of a great show. It’s an intelligent and at times inspiring play, telling an important story and has lots of interesting things to say. We just felt its key messages weren’t delivered all that convincingly, and they were frequently marred by some pacing issues.