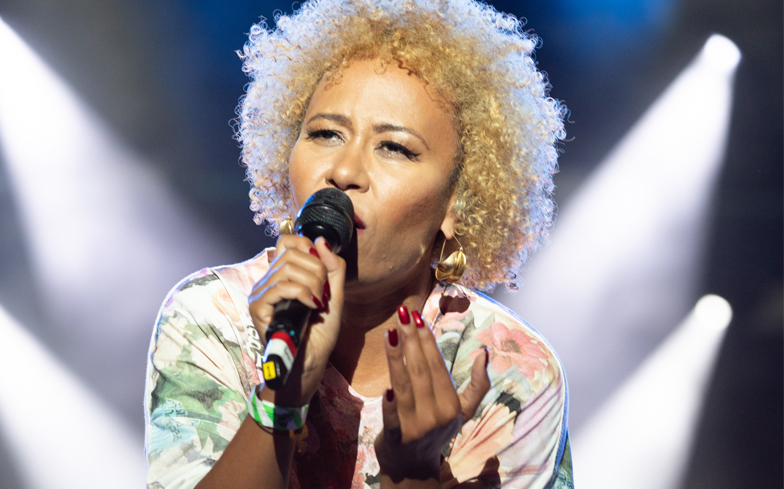 Manchester Pride Live was a sea of twinkling smartphone lights waving in the air for Emeli Sandé’s very special performance at the LGBTQ event.

The singer-songwriter gave a rousing set at the Mayfield site to a crowd of thousands as they sang back the words to some of her most popular ballads.

But there was one song that the largely LGBTQ audience was really taken with, and speaking with Emeli backstage, Read All About It is the track she’s identified as the one that has always connected with her queer fanbase.

“Wherever I go in the world, it seems to be a song that resonates with a lot of people – especially the LGBTQ community,” she told us.

“There’s lots of stories about coming out and gaining the confidence and having the power to do that, and I feel so proud that it’s been able to help people do that.”

Emeli also had a special treat for fans in the crowd as she performed brand new single You Are Not Alone during her set, which she added has a message that speaks to the LGBTQ community.

“My message with that song is that you are not alone here,” Emeli explained.

The track has been lifted from Emeli’s third studio album Real Life, which she hopes will inspire hope and confidence in people during a time of divisive politics.

“I feel like the time were living in at the moment, confidence is needed more than ever,” Emeli told us.

“There seems to be a real mission to dampen everyone’s confidence and divide people, and I feel that music and art should be used to counteract that and be used to bring people together again. That’s what I want to do with my music.

Emeli added that she reached out to Manchester Pride herself to ask if she could perform, and was honoured when the answer was yes.

“I think it’s so progressive, there’s a really energy to it,” she said. “That’s what my music should be involved in.”

Ariana Grande, Years & Years, Cheryl, and Kim Petras were among the other artists who performed at Manchester Pride Live across the weekend.

Emeli Sande’s new single You Are Not Alone is available to download and stream now.

Her new album Real Life will follow on 13 September.