Elton John hurt Ellen Degeneres’ feelings when she came out 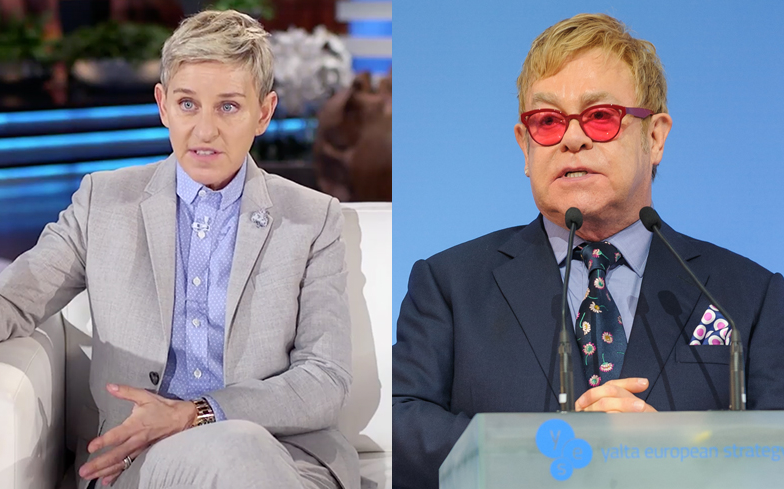 “I had never met him and I thought, ‘What kind of support is that from a gay person?'”

Ellen Degeneres reflected on her coming out experience during an appearance on the American Expert podcast.

The talk show host spoke about the struggles her career faced after, the cancellation of her sitcom, and the backlash from the media.

She told Dax Shepherd: “[The show ended] because I came out. This is a long, long story — but they really didn’t want me to come out.

She also revealed: “They finally let me come out, and it was a huge success the night of. It was huge. It was celebrated … and then they just stopped promoting it because everybody was scared.

“We were losing sponsors, so they were just acting like, ‘We’re just letting it glide. We’re not going to touch it.’ I got no more advertising, I got no more promotion. So they canceled it.”

Ellen also revealed that pop music icon Elton John ‘hurt’ her feelings when she came out.

“Even Elton John said, ‘Shut up already. We know you’re gay. Be funny’. I had never met him and I thought, ‘What kind of support is that from a gay person?’ “But everybody assumed I was just nonstop talking about. It hurt my feelings.”

The Emmy winner also opened up about her battle with depression: “People were making fun of me. I was really depressed. And because of that and because the show was canceled, I was looked at as a failure in this business. No one would touch me. I had no agent, I had no possibility of a job, I had nothing.”

Ellen also recounted the heartbreaking experience she faced 40 years ago, when her 21-year-old girlfriend was tragically killed in a car accident.

“My girlfriend was killed in a car accident when I was 20 years old. I wasn’t doing comedy, I think I was probably waitressing some place at the time I was living with her,” she told Shepard.

“When she was killed, I couldn’t afford to live where we were living together. I moved into this tiny little basement apartment,” revealed Ellen. “I was sleeping on a mattress on the floor that was infested with fleas [and] thought: “Why is this beautiful, 21-year-old girl gone and fleas are here?”

She added: “I just thought it would be amazing if we could pick up the phone and call up God and ask questions and actually get an answer. So I started writing. It just unfolded. I wrote the entire thing. When I finished I read it and thought “Oh my god, that’s hilarious.”

Ellen’s form of therapy turned into her first stand up routine, Phone Call to God, which she infamously performed on The Tonight Show Starring Johnny Carson in 1986. The routine launched Ellen’s career, one that’s garnered the actress and producer 20 People’s Choice Awards and 30 Emmy’s.