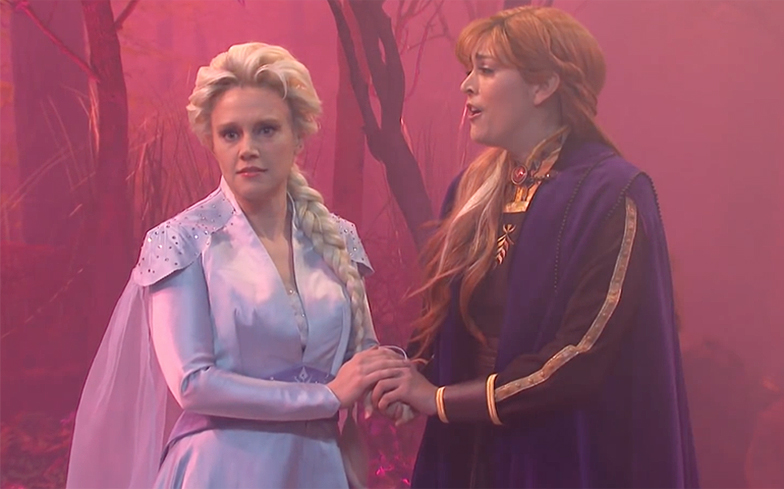 “The lack of any romantic interest doesn’t bother me anyway.”

Ever since ice queen Elsa burst onto our screens and became a fully-fledged queer icon in Disney’s hit 2013 movie Frozen, fans have called for her to ‘come out’ as a member of the LGBTQ community with the hashtag #GiveElseAGirlfriend going viral.

Unfortunately, last year’s Frozen 2 didn’t provide fans with the queer Disney princess representation they were waiting for – so the team at Saturday Night Live have decided to take matters into their own hands.

A parody sketch on this weekend’s episode imagined what the movie’s deleted scenes could look like, including one where Anna (Cecily Strong) tells her sister Elsa (Kate McKinnon) she knows she’s gay… and that’s okay!

“I’m not anything. You have a fulfilling heterosexual marriage at the age of 18 and I’ve just spent two whole movies playing with snow, both are equal and good. And then in Frozen 3 I can just freeze my eggs,” Kate’s Elsa says.

Urging her to come out, Cecily’s Anna changes the lyrics to Let It Go, singing: “We all know, we all know, we’ve all known since you were a tween, when you dressed as Brienne of Tarth on three separate Halloweens.”

“I don’t care what Disney says, the Twitter storm rages on,” she continues, before Elsa cuts in, “the lack of any romantic interest doesn’t bother me anyway.”

Watch the hilarious sketch here or below.