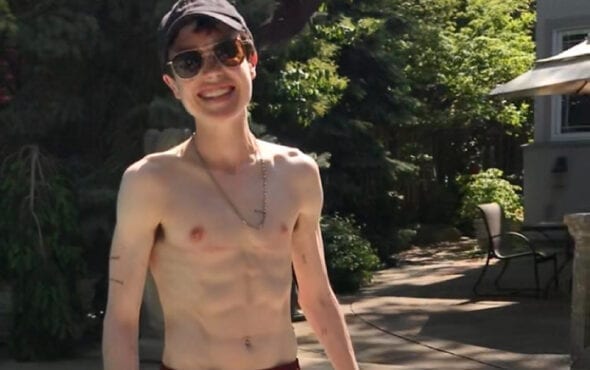 Elliot Page celebrated a new milestone on Monday (24 February) after coming out as trans/non-binary earlier this year.

On social media, fans came out in droves to express their ‘euphoria’ over Elliot and his happiness and honestly, same.

“Elliot Page looks so happy in his new pic! We love to see it,” one fan tweeted. “This is what we need to see more of and what the media rarely shows: trans joy and prosperity.”

Another wrote: “In a world so full of bullshit and pain, Elliot Page in his swim trunks, utterly BEAMING, just gives me life. I can’t quit grinning. Pure joy.”

Elliot came out as transgender/non-binary in December 2020 in a powerful statement on social media, in which he wrote: “My pronouns are he/they and my name is Elliot. I feel lucky to be writing this. To be here.

“I feel overwhelming gratitude for the incredible people who have supported me along this journey. I can’t begin to express how remarkable it feels to finally love who I am enough to pursue my authentic self.”

In an interview with Oprah Winfrey last month, the star discussed his coming out journey and the various anti-trans bills that are currently being introduced in legislature throughout the United States.

Elliot told Oprah that it felt “crucial and important” for him to to disclose his transgender identity with the world due to the “horrible backlash” towards the community – and to inspire transgender youth.

He expanded on this in an accompanying interview with Vanity Fair. When asked why he felt the need to sit down with Oprah, Elliot admitted: “It was something I needed to sit with for a moment, because the backlash right now is so intense.

“But the rhetoric coming from anti-trans activists and anti-LGBTQ activists—it’s devastating. These bills are going to be responsible for the death of children.”

Elliot said he wanted to use Oprah’s “wide-reaching platform” to open up about his own transition, including some of the life-saving resources he’s been able to access “whether therapy or surgery, that have allowed me to be alive, to live my life.”

“Actually, I was really nervous. But I thought about it for a bit, and it just felt like, Okay, the GOP basically wants to destroy the lives of trans kids and stop the Equality Act. How do you not use this platform?”

Elliot is currently filming the third season of The Umbrella Academy, which is rumoured to return later this year. In a photo from the first day of set, the actor – who plays Vanya Hargreeves in the superhero drama – wrote: “Omg we’re back again.”

Look at this dude. His smile is contagious. ❤️#ElliotPage pic.twitter.com/wNgSoQ4Ehe

Elliot Page got top surgery AND he fucking got absolutely shredded and I have never felt so euphoric for a person I've never met before pic.twitter.com/G7oj1CvlR7

Elliot Page looks so happy in his new pic!!!! We love to see it. This is what we need to see more of and what the media rarely shows: trans joy and prosperity. pic.twitter.com/gsVEnmHlwx

Yall come look at Elliot Page 🥺🥺🥺 this just made my day 🥰🥰 pic.twitter.com/7frYnRzmo6