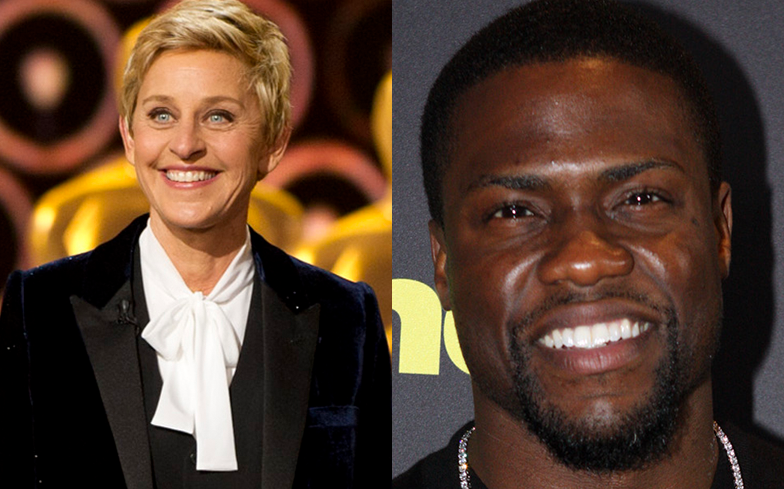 “We want him to host, whatever we can do, we’d be thrilled.”

Ellen DeGeneres has reached out to the Academy of Motion Pictures to ask if Kevin Hart can still host this year’s ceremony.

The American comedian announced that he would be stepping down from Oscars hosting duties on social media back in December, after past homophobic tweets were unearthed from his Twitter account.

He recently stopped by The Ellen DeGeneres show to discuss the matter, where Ellen told him: “I called the Academy today because I really want you to host the Oscars.

“We want him to host, whatever we can do, we’d be thrilled. The Academy is saying what can we do to make this happen.”

Before Kevin stepped down, he told fans in an Instagram video that he wouldn’t apologise for his past tweets.

“I just got a call from the Academy and that call basically said, ‘Kevin, apologize for your tweets of old or we’re going to have to move on and find another host,’” he said in the video. “I chose to pass on the apology.”

During his appearance on Ellen’s show, he explained why he didn’t want to express sorrow for his comments and said he didn’t have a “homophobic bone” in his body.

“This is stuff I have addressed,” he said. “I’m not going to pay it any mind because when you feed into that stuff you only add more fuel to the fire.”

However, Kevin revealed he has since reconsidered taking the job back.

“You have put a lot of things on my mind,” he told Ellen. “Leaving here, I’m promising you I’m evaluating this conversation. Let me assess, just sit in the space and really think.”