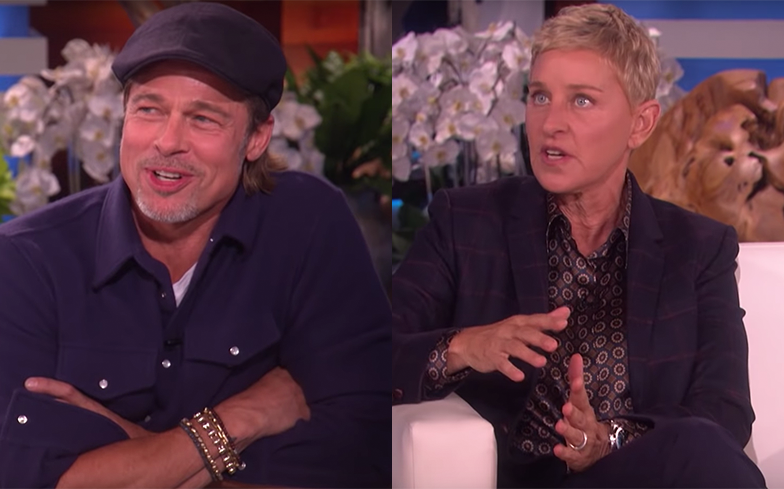 “We’ll talk about that later.”

Ellen DeGeneres claims she dated one of Brad Pitt’s ex-girlfriends.

The American actor made an appearance on The Ellen DeGeneres Show earlier this week to promote his two new films, the Quentin Tarantino-directed drama Once Upon a Time in Hollywood and the sci-fi blockbuster Ad Astra.

The two stars reminisced on the first time they met each other, which they say was in the “late 80s, early 90s”. Brad said: “I remember it was a Melissa Etheridge pool party. I think you were hitting on my girlfriend.”

Ellen responded, “I actually sense that I’ve dated another one of your girlfriends – we’ll talk about that later,” and Brad hilariously said they’ll talk about their mutual friend off-camera.

Ellen later tweeted: “It turns out Brad Pitt and I have similar taste in women.”

Earlier this year, Ellen renewed her talk show for three more seasons, meaning it will be on air until at least 2022. “Doing this show has been the ride of my life,” she said. “Sometimes in a relationship, you need to take a break.

“But I don’t. You’re stuck with me. Because I just signed for three more years.”

Last year, Ellen worried fans when she said she was “close to declining” her contract with NBC.

However, she told Deadline that she isn’t ready to give up her show just yet, adding that while she is “torn” over how long to keep going with it, her brother convinced her that the show is needed in the era of Tr*mp.

After starring in her own Netflix stand-up special, Relatable, the comedian said she’s looking to try more new and exciting things, including documentaries – which she “loves” – and a movie adaptation of a “very successful” book.

Related: Ellen DeGeneres reveals she was sexually assaulted as a teenager.