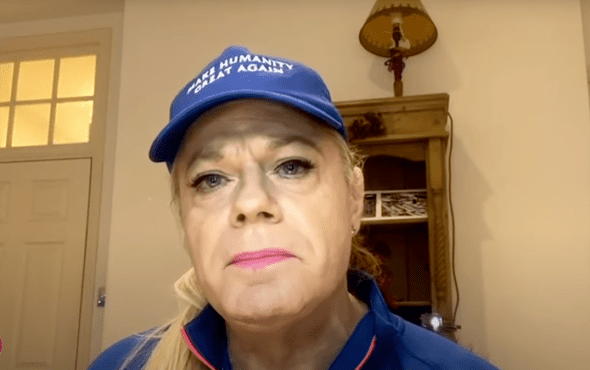 “Thank you for being so supportive.”

Eddie Izzard and Lorraine Kelly shared a heartfelt moment during the comedian’s appearance on the popular daytime talk show.

The comedian stopped by to promote her 31 marathons in 31 days challenge in relation to the Make Humanity Great Again campaign.

During the interview, Izzard and Lorraine discussed gender, identity and her pronouns with the latter, stating: “Just before Christmas, you were in the news obviously wanting to be known as she now and can I apologize to you if I get that wrong because we are still kind of, just going along with it.”

Izzard quickly followed up assuring her it was okay.

“But you know it’s as if some of the world is saying ‘Are you serious about this? You’re serious about being trans? Because we just didn’t know for 35 years,'” she said.

Late last month (December 2020), Izzard appeared on The Portrait Artist of the Year and requested to be referred to with “she” and “her” pronouns. The 58-year-old was widely praised for the request as she confirmed she was gender-fluid on the series

At the end of the interview, Lorraine praises Eddie for her milestones calling her a “fantastic woman and fantastic human being” which prompted a heartfelt response from Izzard.

“Thank you for being so supportive. You really have been so supportive and it just feels…it’s great that you’re there,” she said.

Izzard’s emotional response was met with support from Lorraine, stating: “Aww Eddie thank you, thank you so much that means the world.”