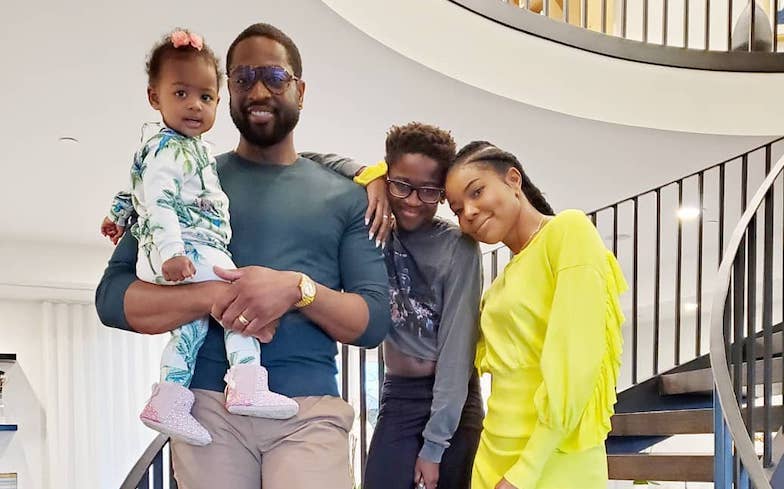 “Here’s the thing—I’ve been chosen to lead my family not y’all.”

Dwyane Wade has once again proven how wonderful a father he is after defending his son from homophobes on social media.

On Saturday (30 November) Wade’s wife, Gabrielle Union, uploaded an adorable photo of her family following her controversial axe from America’s Got Talent, telling her followers she was thankful for their love and support.

Soon after, homophobic ignorant trolls invaded the comments section and slammed the family for “encouraging” their son Zion to wear a crop top and painted nails “at such a young age”. It’s so incredibly stupid.

One wrote: “I’m trying to figure out why black women and their men are allowing that young man to dress like a girl.”

Dwyane addressed the comments on his Twitter, writing: “I’ve seen some post-thanksgiving hate on social about my family photo. Stupidity is apart of this world we live in—so i get it. But here’s the thing—I’ve been chosen to lead my family not y’all.

“So we will continue to be us and support each other with pride, love & a smile!”

His tweet received praise from fans for allowing his child to express himself in how he sees fit.

“Believe in your kids, respect and understand their decisions and let them be the person they want to be,” wrote one user. “With this kind of parenting your kids will grow up to do great things but most importantly great people.”

Another said: “You are an amazing father. You not only stand up for your son, you accept him as he is. Love and acceptance are two of the greatest gifts a parent can give to their children.”

Earlier this year, Dwyane publicly voiced his support for his son after he attended Miami Pride. Although he couldn’t be there in person, he sent lots of heartfelt messages to his son, including one that read: “Wish I was there to see you smile kid!”

In an interview with Variety, the basketball player explained that he saw it as his “job as a father” to support his son.

And speaking about how other parents can support their children during Pride Month, he added: “Get to know them and where they are. I have to say to most parents, get to know your kids. Don’t put your wants and needs on them.”

Gabrielle said 50% of the proceeds will be donated to The GLSEN organization, “whose mission strives to ensure safe schools for all students, regardless of sexual orientation as well as gender identity”.

She wrote: “Inclusion and equality are two essential pillars needed to move towards growth and progressive thinking and action in our society. We have created a Limited Edition T shirt to help create a more inclusive space with our platform.”

The t-shirts – which read “Please Remain Inclusive & Dedicated 2 Equality” – are available at YnG DnA for $35.