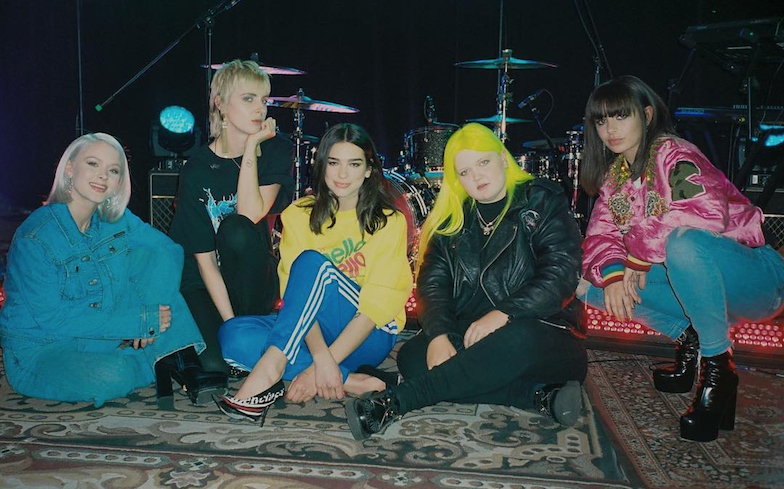 Ahead of her BRIT Awards performance tonight, British pop princess Dua Lipa has unveiled a Live Lounge cover of her massive single IDGAF – with some special guests in tow.

Charli XCX, Zara Larsson, MØ and Alma join Dua for the acoustic, all-star team-up, and it’s resulted in pop music fanatics (especially us) craving a collaborative album. We’re also imagining a future where these five are a kick-ass girlband. Can you imagine the slayage? Oh lawd!

Watch the video below. Oh, and we don’t mean to sound threatening, but if we don’t see ‘IDGAF All-Star All-Female Team-Up Remix’ added to Spotify’s New Music Friday playlist, we are going to riot.

ICYMI – Dua’s self-titled debut was the biggest selling female album of 2017 in the UK.

Its sixth single – New Rules – became a huge worldwide hit last year, peaking at number one in the UK, Ireland, the Netherlands, Belgium, as well as the top ten in Australia, Canada, Finland, Germany, Italy, New Zealand, Norway, Sweden and the U.S.

IDGAF has also charted in the top ten in Australia, New Zealand, the UK and topped the charts in Ireland.

Dua is up for five awards at tonight’s BRITS, including British Album of the Year and Single of the Year. Hopefully she sings IDGAF and reenacts the video.

Watch the incredible clip below.