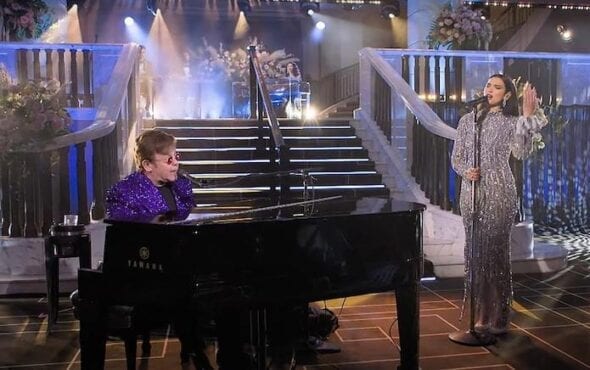 Music icon Elton John was joined by husband David Furnish and actor Neil Patrick Harris for an hour-long virtual pre-show at the Rosewood hotel in London.

The event took place online to help fundraise for HIV/AIDS awareness and education. Elton John was joined by a star-studded line-up of guests.

The cast of Channel 4 drama It’s A Sin, which explored the impact of the HIV/Aids crisis in 1980s London, made an appearance. Neil Patrick Harris acted as host for the event.

Lady Gaga made a surprise appearance to help fundraise for the virtual show. The acclaimed singer-songwriter spoke about supporting mental health services for those infected with HIV and AIDS.

In a pre-recorded video, the artist shared a moving message with the audience: “This last year has taken a huge toll on the mental health of people all over the world. We have all had those days, weeks or longer where we might look okay from the outside, but inside is a different story altogether.”

She continued: “Our mental health is fundamental to our physical health and this is especially true for young people fighting HIV. It’s tragic to think a quarter of adolescents living with HIV don’t have access to the medical care they need because of depression or feeling overwhelmed. The reality is we won’t end the AIDS crisis unless we care for both mental and physical health.”

Elton John thanked viewers for getting involved: “We haven’t missed a year yet and we certainly weren’t going to miss our 29th annual Oscar Party to benefit my Foundation – even if it meant going virtual.

“It was so much fun to perform with the gorgeous Dua Lipa and open up our party to supporters all over the world.

“I’m so grateful to Neil for hosting, everyone who attended and all my friends who participated so that we could continue this legendary event to raise vital funds to end the AIDS epidemic.”

The Elton John AIDS Foundation was established in 1992 and funds frontline partners to prevent infections and fight the cultural and political stigma surrounding HIV/AIDS.

The pre-show was available to the public and hosted in four time zones with each accommodating 100,000 viewers.

“Thank you! Last night, for the first time ever, @EJAF supporters were invited to attend the iconic #EJAFOscars where we raised $3 million to provide relevant and life-saving HIV care to young people around the world,” the Elton John AIDS Foundation posted on Instagram.

“To everyone who participated, attended, sponsored the party, or donated – we couldn’t have done it without you.”

You can catch a snippet of Dua Lipa and Elton John’s duet together here or below: