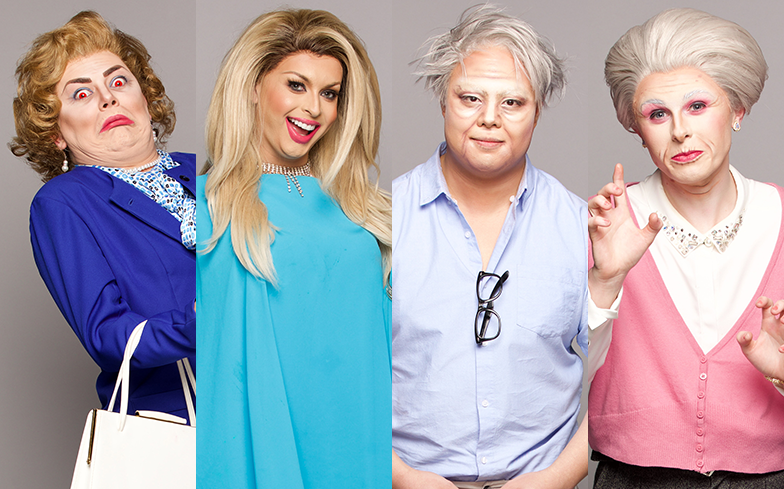 Whew honey. The British queens came to slay on Snatch Game didn’t they?

Since the UK spin-off was announced last year, fans have been speculating all over social media as to which British icons would make an appearance. Surprisingly, only four of the queens impersonated figures from the UK.

Baga Chipz channelled her inner Meryl Streep for an impressive Margaret Thatcher parody, Cheryl Hole stepped into the old-maiden shoes of Gemma Collins, Blu Hydrangea embraced her inner foodie to deliver Mary Berry and Sum Ting Wong took on national treasure David Attenborough. The other queens, however, chose celebrities from across the pond.

The Vivienne opted for Tr*mp, Crystal chose to compete as Blanche Devereaux from The Golden Girls and Divina De Campo followed in the footsteps of Milk and impersonated Julia Childs, although her original character was Thatcher.

Although we were only treated to four British legends, it was potentially one of the greatest Snatch Games in HERstory.

But did international audiences understand the references? Those who aren’t from the UK have struggled so far with our crass and irreverent sense of humour and colloquial terms, so we’ve broken down all the British celebs from this year’s Snatch Game.

Like we said above, Sir David Attenborough is a national treasure here in the UK. The British broadcaster and historian is best known for writing and presenting the nine natural history documentary series forming the Life collection. For his work on Blue Planet and Our Planet, he won two consecutive Primetime Emmy Awards for Outstanding Narrator. Attenborough is also the only person to have won BAFTAs for programmes in  black and white, colour, HD, 3D and 4K.

Gemma Collins, also known as “The GC”, rose to fame in the UK with her appearance on British reality television series The Only Way Is Essex. She subsequently became the subject of hundreds of memes with her hilarious appearances on shows such as I’m a Celebrity… Get Me Out of Here!, Celebrity Big Brother and Dancing on Ice. Oh, and who can forget when she fell through the stage at the Radio 1 Teen Awards? Watch here.

Margaret Thatcher served as the Prime Minister of the United Kingdom from 1979 to 1990, becoming the first woman to hold office and the longest-serving prime minister of the 20th century. She also led the Conservative Party from 1975 to 1990. Thatcher was nicknamed “The Iron Lady” because of her staunch leadership and controversial policies.

Mary Berry is a British food writer and television presenter with more than 75 cookery books to her name; estimated sales are at over five million. Her fame reached new heights in 2010 when she became a regular judge on the BAFTA Award-winning baking competition programme, The Great British Bake Off. The show has become widely successful in the UK; at its peak, it averaged over 13 million viewers. Berry left the show in 2016 after it relocated to Channel 4.