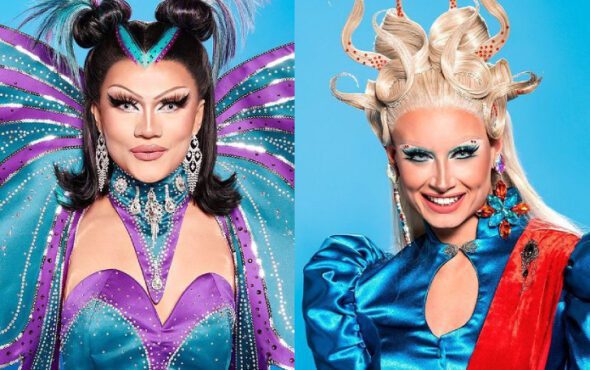 River Medway and Scarlett Harlett have shared what they would have worn on the Drag Race UK runway had they been in last week’s episode.

The queens acted in Bra Wars, The Fempire Claps Back, a challenge inspired by Star Wars in the season’s latest challenge.

With a theme of Scene Stealers on the runway, the four remaining queens took their inspiration from the big screen.

Although River and Scarlett recently sashayed away from Drag Race UK, the two both pulled inspiration from Kill Bill for what they were going to serve on the runway.

Writing on Instagram on 11 November, River revealed that she had planned to “pay homage” to Lucy Liu as O-Ren Ishii in the iconic movie franchise.

“@lucyliu I love you,” the queen wrote. “For my Scene Stealer runway I wanted to pay homage to the great Lucy Liu in Kill Bill as O-Ren Ishii. Lucy is such an inspiration to me and I really resonate with the character (minus all the killing). There is actually a wig reveal I planned for the runway involving a hair-topper and a sword replica but of course unfortunately never got to do!”

River’s reveal was going to be a remake of the legendary scene where the Bride (Uma Thurman) slices off the top of O-Ren’s head, leaving the brain exposed as she falls to her death in the snow.

Towards the end of their time on the show, there were growing tensions between River and Scarlett – which it seems this runway would have fuelled had they both still been in the competition as the latter had planned on a look inspired by O-Ren’s nemesis.

She continued: “One of my favourite movies ever is Kill Bill! I’ve said this a lot, but boss bitch females are my biggest inspo in life. And what better boss bitch can you get than Beatrix Kiddo aka THE BRIDE aka the amazing @umathurman.

“I also had some more props including a fake eye and a severed head but I couldn’t find the rest of the pics, but I loved dressing up as a murderous bitch! Now send that crazy 88 my way.. I’ll get through ‘em.”

Commenting on the post, River joked that fans were “robbed” of the two looks walking the runway.

“Can’t believe the world was robbed of me and you battling out,” she wrote.

With no queens being sent home this week, the top two will head to the semi-final alongside Vanity Milan and Krystal Versace.

This season is expected to culminate in a top three, meaning one more queen will sashay away before RuPaul decides the UK’s Next Drag Superstar.