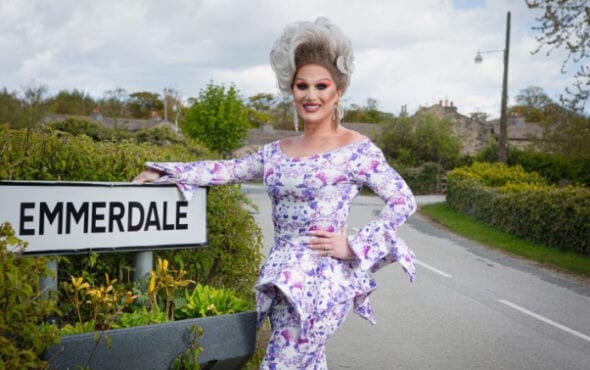 The Vivienne has been confirmed for a guest spot on Emmerdale for the soap’s first ever Pride celebration.

The fierce queen, who won the first ever season of BBC’s RuPaul’s Drag Race UK, will sashay over to the Dales as the village church and LGBTQ+ communities celebrate Pride Month for the first time in history.

“My role is to officially open the event on the stage! It’s great for Emmerdale to be doing this and I’m delighted to be part of it,” said The Vivienne, who will play herself in the series.

“We’re making that little bit of history for all the gays and the LGBTQ+ community and it’s just an absolute honour.”

“The Vivienne will add a dash of her own inimitable wit and fabulousness to the show and will certainly raise a few eyebrows in the process.”

Since conquering Drag Race UK, The Vivienne has become one of the most prolific drag entertainers in the UK with appearances on shows such as The Big Fat Quiz of the Year, Celebrity Juice and The Great British Sewing Bee.

As for the world of music, The Vivienne has left fans slain with infectious pop anthems such as Tonight, You Spin Me Round – Initial Talk Remix and Bitch On Heels, the latter of which spawned her incredible debut music video.

The Vivienne will make her Emmerdale debut in June.