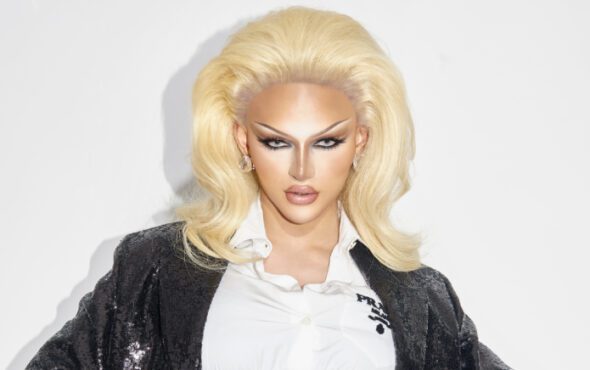 The next generation of drag has arrived.

In November 2021, Krystal Versace made herstory when she usurped The Vivienne and Lawrence Chaney as the UK’s Next Drag Superstar on the third incredible season of RuPaul’s Drag Race UK.

Crowned at the age of 20, Krystal became the youngest winner in the entire Emmy Award-winning franchise and the only champion to have been born in the – just wait for it – 21st century. Gasp, honestly.

For her first ever magazine cover, the Kent-born drag queen speaks with GAY TIMES about her herstoric win, how she’s adapting to life as one of the most visible drag entertainers in the country and the importance of uplifting all forms of drag.

“I just hope people will appreciate everyone’s art-form,” Krystal tells us after her sickening photoshoot, in which she pays homage to bombshells such as Madonna and Pam Anderson. “I think drag is always evolving, and it’s so exciting to see where it goes.

“I’m not an advocate for drag, because drag is huge and I’m just a small percentage of what someone would look up to. I want to open people’s eyes a bit and be like, ‘We are the new generation. We are young and it’s time for us to catch our light.’”

Krystal also reveals the impact of her win on her family, saying her parents have “come around really quickly” to her career as a drag queen after her initial foray into makeup “didn’t go down amazingly” with them as a teen.

“They love it. They absolutely love it,” she says. “I think they’ve seen the scale of the show and how much it meant to me, because I shared loads of stories [on Drag Race] that I never talked to my parents about.

“They got to understand me, and learn about me through the show.”

On her sudden rise to fame, Krystal adds: “It’s very different from what I’ve ever known. I was getting a COVID test yesterday and I was spotted in the centre, and this person was taking a photo of me. I was like, ‘Girl, come on.’ I’m still trying to enjoy my 20s, where you just go out, have fun and enjoy yourself.

“People are looking at me, people want a photo, which is totally fine, but I’m just trying to find the balance in that. Sometimes, it’s a bit much for me personally.”

Elsewhere, Krystal also reveals how her late grandmother shaped her into the drag performer she is today, why she was never going to be boxed into as a “bitch” on Drag Race UK and her relationship with RuPaul.

You can read Krystal Versace’s cover interview with GAY TIMES in full from 17 December via the GAY TIMES app, Apple News+, Readly, and Flipster.