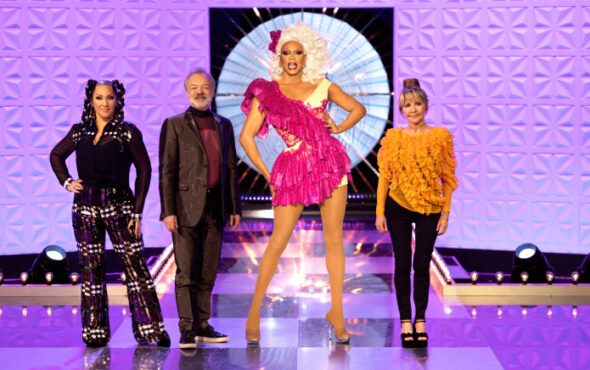 For the first time in Drag Race UK herstory, Mama Ru chose to eliminate two queens from the competition. TWO!

Later, Lulu made her Drag Race debut as she watched the contestants sashay down the runway in fruit-inspired couture. During deliberations, Choriza and River received much harsher critiques than their sisters for their impersonations of Margarita and Amy, respectively.

“First of all, I think this was a really good Snatch Game, so hats off to all of you,” Graham Norton said, before telling Choriza: “Margarita Pracatan seems like a comedy character, but that was her… And I thought you did a really good job of being her, but it slightly ran out of steam.”

RuPaul added: “At this point in the competition, we are splitting hairs. But your performance compared to the others… You weren’t able to take her beyond the obvious.”

River, however, was critiqued for both her performance and runway. Michelle Visage called her ensemble “crafty” and told her that she needs to “bring it to the next level”.

“So you were Amy Childs in Snatch Game,” she started. “But I felt like you were using stock lines from TOWIE series one and two. Amy is so much more than that. I was kind of let down, I’m not going to lie.” 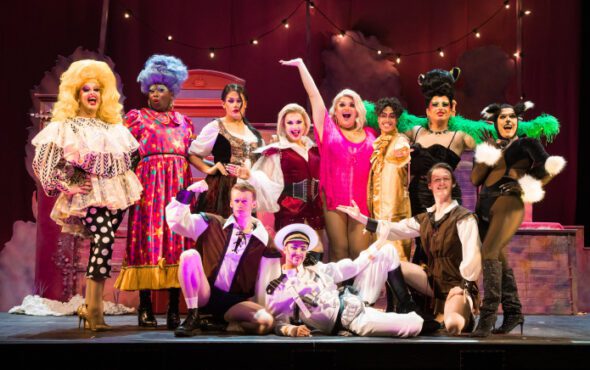 Lulu, who was living her goddamn life on the panel, said: “The difficulty for you this week is that everyone else was just a little bit more on it.”

For her impersonation as Micro-Wavay ambassador Nigella, Ella received overwhelmingly positive remarks, with RuPaul telling the contestants – as well as aspiring Drag Race stars at home: “If you want to know how to do Snatch Game, this is it. You did it.”

Unsurprisingly, Ella walked away with her second maxi-challenge win – meaning she ties Krystal for most amount of wins (so far) – while River and Choriza found themselves in the bottom two for the first time.

In front of Lulu herself, the two queens competed in the lip-sync smackdown to her classic version of the Isley Brothers’ Shout. For the first time in the herstory of the British spin-off, RuPaul showed no mercy and gave both queens the chop.

It marked the first double sashay since US season eight, when Dax Exclamation Point and Laila McQueen failed to impress Ru with their lip-sync to Gloria Gaynor’s legendary disco anthem I Will Survive. The first ever double shantay occurred in season five, when Honey Mahogany and Vivienne Pinay competed against each other to the beat of Britney Spears’ Oops!… I Did It Again.

“Now, you may not have gone all the way but my love for you is here to stay,” Ru told the queens. “Sashay away.”

After exiting the competition, River said it felt “shit” but is “really happy with my time here”. Choriza joked: “It’s time to Brexit bitches! I think everyone back home watching, my family, my boyfriend, I think they are all going to be really proud of me.”

With both River and Choriza cementing themselves as firm fan-favourites over the past six weeks, Ru’s decision was met with mixed reactions from social media.

Here’s what viewers had to say about the episode:

Is Ru Paul on something? #dragraceuk

I don’t think I agree with that decision. I believe it was made for shock value / television. It wasn’t THAT bad .. #DragRaceUK pic.twitter.com/Tcd6EacPVC

The latest Drag Race UK elimination doesn’t make any sense at all.

Choriza’s Snatch Game was predictable and River gave ‘stock’ replies yet Kitty was hilarious when she literally just read out a list of memes in GC’s voice? #DragRaceUK pic.twitter.com/FuhOfSGFdL

why the double elimination?💀 #DragRaceUK

I’m going to need 3-5 working days to recover from this episode #DragRaceUK pic.twitter.com/vKLYQy9Jgp

Ru: “I’ve never heard of that person, change it to someone I know.” #DragRaceUK

Is one of the requirements of snatch game to bring a character so ru can tell you to be someone completely different? #DragRaceUK

This is the earliest my fave from a drag race series has gone home, rip @river_medway 😔 she ain’t dead, I’m just fuming she sashayed #dragraceuk

are the judges seeing the same thing as we are??? #dragraceuk

The remaining five queens go forward to next week as they continue to battle it out to be crowned the UK’s Next Drag Superstar when RuPaul’s Drag Race UK returns on Thursday 4 November from 7pm exclusively on BBC Three via iPlayer.