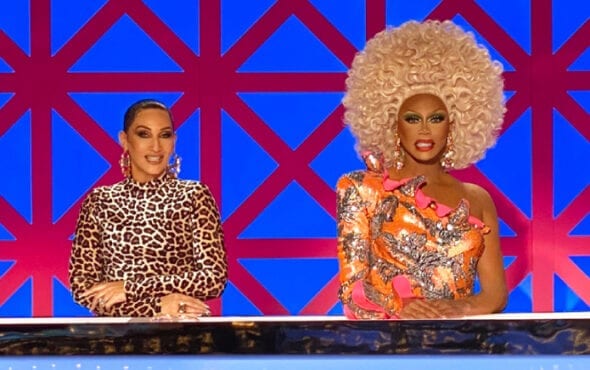 Spoilers ahead for the third episode of RuPaul’s Drag Race UK season two.

After their limbo skills were put to the test in the hilarious mini-challenge, the queens joined forces with their best Judy in the competition, before a cruel twist revealed they would be, in fact, competing against each other as “fashion frenemies”.

The pairings – which didn’t come as much of a surprise – were as follows: Asttina and Bimini, A’Whora and Tayce, Ellie and Lawrence, Ginny and Sister Sister, Tia and Veronica. Because it’s Drag Race, and we stan a twist, Mama Ru threw another spanner into the works: this week, there are no safe queens – it’s all tops and bottoms. Vers? We don’t know her.

Ginny, who was tasked by Ru to serve a sexier side to her quirky persona, was read for filth but managed to escape the bottom two, leading to a lip-sync showdown between Tia and Asttina to the beat of Dua Lipa’s Don’t Start Now. As one of the most revered entertainers in the competition, as well as the show’s self-described “first real dancing queen,” viewers – even the contestants – expected Asttina to secure another week in the competition. Tia, however, impressed the judges with her more comedic take on the dance anthem, and booted the East London queen out of the running.

Here’s how fans reacted to the shock elimination:

I proper can’t believe that elimination me, Jesus Wept. Thank god Winterwatch is on now to take my mind off it. #DragRaceUK #DragRace #Winterwatch

So confused at drag race asttina was deffo a winner wtf

nah what the fuck ru

This season is already top tier Drag Race isn't it. I mean I'm obviously speaking some horrendous mid-season jury vote twist into existence here to fuck it all up but it's so good!!

Holy fuck. That was one of the best episodes of drag race …. ever? #DragRaceUK

Was that one of the best episodes of Drag Race ever? #DragRaceUK

In what world did Tia outperform her, I agree that her outfit was basic but, Ginny’s was awful it’s the worst thing to hit the runway. Asttina gave the best lip sync of Drag Race UK for sure it was perfect

in drag race history, it should’ve been a double shantay but if they couldn’t do that then, Asttina was they obvious winner. I am so shocked @AsttinaMandella you deserve better I hope you don’t think any worse about yourself because you served an incredible lip sync

omg has everyone cried this episode of drag race jeez

On next week’s episode, the top nine queens will present in their own daytime magazine show, Morning Glory. Ru, Michelle and Alan Carr will be joined by the queen of British daytime television, Lorraine Kelly.