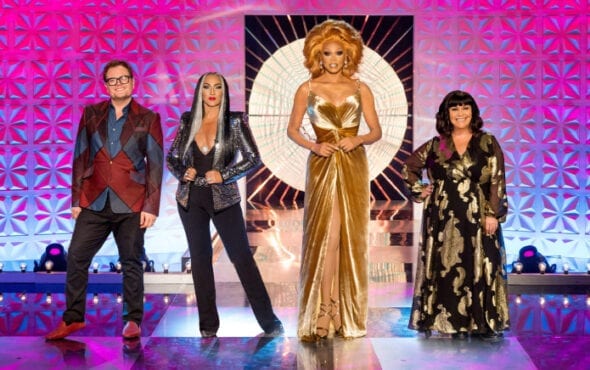 Following her win in the hilarious mini-challenge, which saw the queens embrace their inner butch queen-realness as they performed Ru’s pop favourite Kitty Girl, Ellie decided the order in which her competitors would perform.

She decided to place A’Whora first, herself second, followed by Bimini, Lawrence and Tayce. After admitting it was a strategic move on her part, as she’s the only contestant without a RuPeter badge, the Scot was met with enormous backlash from A’Whora and Lawrence.

Later, A’Whora’s routine was met with mixed reviews from the judges for relying heavily on blue-inspired humour. Alan told the star: “You’ve got great physical comedy but I just thought it was undermined by the rude jokes. But you came out first and you came out with confidence.”

Although Ellie’s performance left the judges in hysterics, particularly for her dick-loving alter-ego Dirty Diamond, her pace was criticised. This also applied to Tayce and Lawrence, while Bimini’s routine – and acne-inspired runway – was praised.

The latter ultimately walked away with the win, her third overall, with best friends – and roommates – A’Whora and Tayce competing in the lip-sync showdown to Dusty Springfield’s chart-topping ballad You Don’t Have To Say You Love Me.

After an emotionally-fused performance, A’Whora lost her place in the competition and was told to sashay away by RuPaul. “I’m feeling really proud of myself. At the end of the day, I left with two wins and only one lip sync,” said A’Whora.

“So I did my best and that’s all I can do. This may be the end but I’m sure you’ll see me next on the cover of Vogue…”

Here’s how fans reacted to the latest elimination:

Drag race got me fuuuimg

i’ve never cried at drag race before until now #DragRaceUK

My heart can’t take this, they are basically sisters….. #DragRace #DragRaceUK

Ru Paul???? Making ANOTHER wrong decision??? Might give up watching drag race I can’t deal with the stress #DragRaceUK

i can not describe how good tonight’s lypsinc was on drag race uk wow.

On next week’s episode, the final four will star in a brand new soap opera, BeastEnders. The queens will be assisted by Eastenders legend Natalie Cassidy. An extra special guest judge will join RuPaul, Michelle Visage and Graham Norton on the panel, before another queen gets the chop.