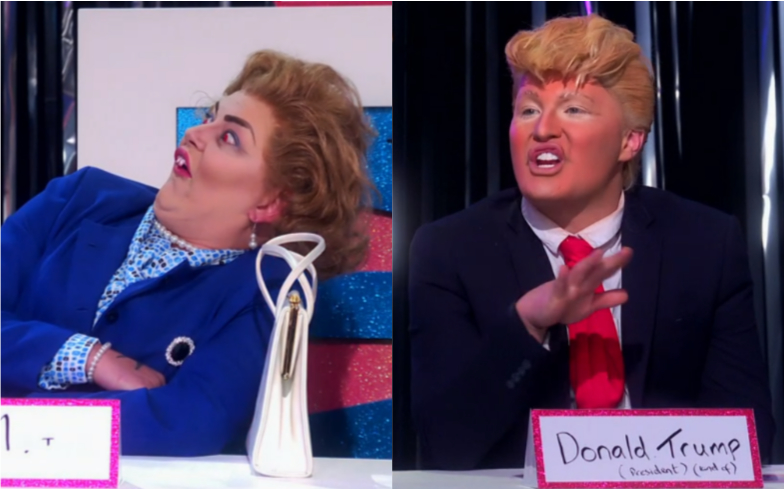 The series will be on World of Wonder.

Drag Race UK hay have just ended – and you can find out who won here – but if there any fans out there worrying about having a distinct lack of British queens, worry no longer as Baga Chipz and The Vivienne have landed their own World of Wonder show, Morning T&T.

And to top if off, they’ll be in the roles of their iconic Snatch Game characters, Margaret Thatcher and Donald Tr*mp respectively.

The rest of the details about Morning T&T are pretty scarce, other than it airing in December, but it looks like it might be emulating British daytime shows like Good Morning Britain or This Morning.

And this isn’t the only show that Baga Chipz has landed since Drag Race UK aired, as she has reportedly been linked to be on an upcoming series of Celebrity First Dates.

“As soon as the producers saw Baga on Drag Race UK they knew they wanted her,” said a show insider. “They love the idea of getting a drag queen on the show. Viewers will get to know the person underneath all the make-up and wacky outfits.”

And Divina De Campo and Jinkx Monsoon have floated the idea of a Drag Race US vs UK. It started when Jinkx wrote: “Just dreamt about Drag Race: US vs UK. If it happens, I’m in.” It sent fans – and us – into meltdown mode.

When we proposed the idea to Michelle Visage in her first interview for the British spin-off, she told us: “That would be really fun, our queens verses the queens that are on Drag Race UK. It could be really interesting, the aesthetic wars.”