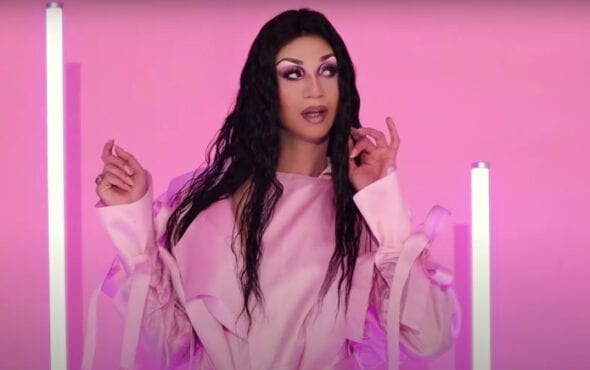 The music video for one of 2021’s most infectious pop anthems is here.

In the stunning visual for Outside In, Tia Kofi proves that she’s anything but Baroness Basic as she serves several sickening looks, as well as body-ody-ody. There’s a waist, honey!

Written by BRIT-nominee Little Boots, as well as Tom Aspaul and his Black Country Disco collaborator Gil Lewis, the Drag Race UK star’s debut single is a triumphant pop number about looking “beyond the surface”.

According to Tia, the lyrics also reflect her “personal experiences” on the second season of Drag Race UK, where she won praise from the judges and her fellow contestants for her talent, but faced constant scrutiny for her aesthetic.

“There’s one thing that Veronica [Green] actually said on a previous episode where she was like, ‘You’re only looking at the surface of a person, look a little deeper,’ and that’s what the song is getting at,” she told us.

“There’s a lot of superficiality and people just see the exterior, but we should all be looking deeper. Everyone’s tweeting hilarious things and posting a lovely selfie on Instagram, but the struggle is real at the moment for everyone.”

She added: “That’s one of the key lyrics, “You’re looking from the outside in,” rather than paying attention to what’s actually happening on the inside. You know that feeling when someone’s like, ‘Yeah, I’m doing fine,’ but, ‘You’re not, are you?’”

Outside In is the first single from Tia’s forthcoming debut collection, and is now available on iTunes and all streaming platforms – listen here on Apple Music and Spotify, and watch the official music video below.

Following Tia’s elimination on the sixth episode of Drag Race UK, we spoke with the fan-favourite about her time on the series and all of the gag-worthy “twists and turns” of season two – including RuPaul’s infamous H&M rant.

“It was definitely something to listen to because people don’t go off like that for no reason,” she explained.

“There was obviously a motivating factor and reason behind it, which I think, ultimately, is Ru’s genuine passion for making sure that we deliver the best, not just for the show, but for ourselves, which definitely came across to me.

“The other half of my brain was going, ‘This is terrifying… What’s going on? I’m frightened right now!’ Looking back at it, it was quite camp to be honest. I was like, ‘Yaaas! Go off Ru,’ and then I realised that it was me and my friends that she was yelling at.”

You can read Tia’s exit interview with GAY TIMES in full here.