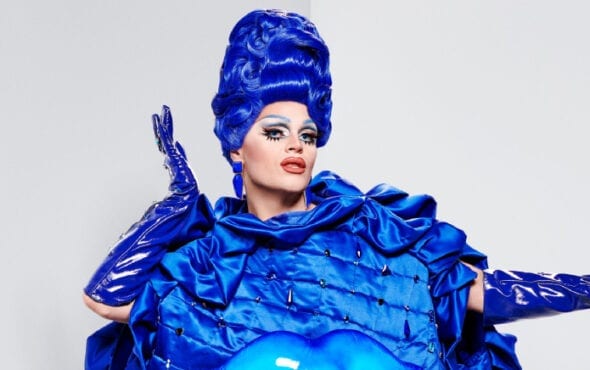 “The toxic fandom have made themselves clear and my mental health has reached rock bottom; my anxiety is showing in physical symptoms.”

In an essay for The Guardian, the Liverpool-based entertainer said she’s been “tagged in many shocking tweets” since she made her debut on the franchise earlier this year.

Although the mission statement of the Emmy Award-winning competition series is to inspire viewers to love themselves – and others – so-called ‘fans’ of the series have felt the need to tell Sister Sister that she’s “unattractive”.

After explaining the difficulties of being catapulted to fame in such a short amount of time, the star recalled an Instagram DM from a user called Simon who said, “You should change your name to Munter Munter because that’s what you are.”

Like contestants before her such as Asia O’Hara, Brita, Silky Nutmeg Ganache and The Vixen, among many others, Sister Sister has received death threats.

In the op-ed, Sister Sister shockingly revealed: “Without going into too much detail, one that came from from a blank profile described in graphic detail how they would like to see me die and what to do with my body.”

Because of this, Sister Sister said her “mental health has reached rock bottom” and her anxiety is “showing in physical symptoms,” adding: “I always considered myself a self-sufficient, robust scouser but it seems even I have my limits.”

She then questioned why “some narratives resonate with trolls so much,” especially when each episode showcases an hour into the lives of 12 individual contestants, meaning viewers won’t “truly know the people on screen”.

“You don’t know the person behind the makeup, only what you are being sold. So, given the option of a fleeting interaction with somebody who provides increasingly needed entertainment during lockdown, why make it negative?” she explained.

“What has to change in order for people to take their own online behaviour seriously? Do we need yet another tragic reminder that people can be ground down over time? I really hope not.”

You can read Sister Sister’s entire essay for The Guardian here.

never let ANY of these puswanas dim your light bitch! YOU’VE GOT THIS N WE GOT U🕊

Doll this fan base can be so toxic. You were cast because you are a STAR! We’ve all seen it for years! I don’t want you to ever forget that cos there are loads of people that love and celebrate YOU ✨❤️

We love you ❤️

YOU ARE AMAZING! Sending love ❤️

Sending so much love 🥰💙

it’s honestly completely out of hand at this point. sending you love 💖

If you ever wanna chat about it let me know! Here for you!

I hope people that support me aren’t responsible for any of this. My message is to uplift others, not tear them down. Sister sister is a sweetheart and this is incredibly upsetting to read. Be kind to others. Words can hurt! https://t.co/PfgzKAqNGF

Don’t be fucking Assholes to the girls. They work so hard to get on a platform to be able to showcase their art and tell their story. If you don’t like someone, that’s great! But you don’t have to spew hate all over the internet. https://t.co/3YJmGyGGsG

Trolling has become a widespread issue within the Drag Race fandom.

After her stint on season 10, Asia was threatened to be burned alive by ‘fans’ because of her skin colour, and season 11 competitor Silky later revealed that racist trolls sent death threats to her family and friends.

When we spoke to Silky, she said “until the producers put their foot down and offer more assistance that this going to continue to happen. People do not deserve to be treated this way. What is it going to take? Is it going to take a queen to kill herself?”

Earlier this year, World of Wonder’s Instagram page addressed the aforementioned Drag Race trolls with several snappy statements including, “If you can’t love our queens, STFU,” and “Kindness is cool.”