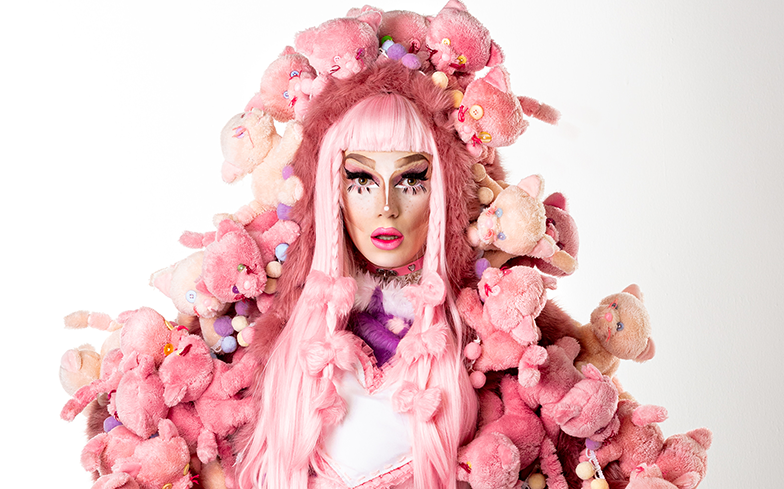 Scaredy Kat may have only lasted two episodes on Drag Race UK, but she’s officially marked her territory on the franchise.

After the 20-year-old Wiltshire born performer sashayed into the werkroom (the youngest in the show’s HERstory) she left her fellow competitors gagged when she announced that she has a partner, a drag queen girlfriend called Pussy Cat.

Although the reaction has been “mixed”, Scaredy and Pussy have been flooded with positive comments from fans who didn’t know they could practice the art-form whether it’s because of their age, gender or sexuality.

“I didn’t think that was a possibility. If I can help people wanna do that and feel like they can, then that’s amazing,” admits Scaredy. “Obviously, there’s been controversial stuff as well, but that’s all good fun I think.”

We spoke with Scaredy about her elimination, subverting expectations of contemporary drag performers and the backstage moment she wishes we could’ve seen. Oh and Pussy Cat makes a surprise appearance too…

I’m so sad to see you go! How are you feeling after last night?

Thank you! That’s really sweet. I would’ve liked to go a bit further, that would’ve been fun. But oh well, it’s happened now, it is what it is, and I’m quite positive about it. I’m feeling good. I had good fun!

How did it feel watching the episode back?

I haven’t even seen the second episode yet! [Laughs] I had more important things to do last night. I’ve seen the first one though and I think it was really good, Pussy gave me the debrief of what went on and it sounds pretty good! It sounds very A-Level drama-ey, maybe A-Level makeup as well… but that’s fine. I tried my best.

That was one of my favourite lines last night.

It wasn’t even A-Level, I only did an AS.

The lip-sync was the first time you ever performed – what was going through your head at the time?

‘Don’t throw up, don’t pass out, don’t fall off the stage, don’t look at RuPaul,’ and ‘Just throw yourself around, it might be funny.’

I was thoroughly thrilled by your performance, it gave me Tammie Brown vibes.

Yeah she’s a fucking weirdo and I like that.

Was it frustrating for you to go this episode, especially because you were underestimated by the other queens?

Yeah, I mean it’s always going to be frustrating and the FOMO you can imagine is unreal. But it’s also a very good opportunity to show what me and Pussy, my girlfriend, can actually do, and what we do is art. That’s what we’ve always done and that’s what we always will do. Drag is just a part of our art.

Did you agree with the judges comments this episode? Especially Michelle’s critique of your makeup?

Well, I could’ve definitely blended it out a bit more… I didn’t realise when we were doing the acting challenge, it would’ve been nice if one of the girls told me, but here we are! I would’ve made it less dark, but that’s what you get when you’re sleep deprived and riddled with no self-esteem.

Well, you did get Arya Stark’s approval…

Exactly! That’s all you need, and if anyone says anything different, she’ll cut you.

Was there anything that didn’t air that you would’ve liked audiences to see?

Obviously, you film and record a lot of stuff, so only a tiny little bit makes it. Things I would’ve liked to see… I stuck up for Cheryl in Untucked, that would’ve been okay. Everyone just kind of ignored me anyway, so… Apart from that, I was happy, I like what’s gone on on the show, it’s all good.

How did you feel about the other queens’ comments about Cheryl?

I just didn’t really get it at the time, I only realised they started thinking it in Untucked. I was a bit like… ‘What the fuck? What are we doing? Are we just going to attack Cheryl for no reason, when certain others of us aren’t doing any better?’ I thought she was really funny, I loved being around her, I loved watching her and I think she’s one of the most entertaining. Others may have been a bit threatened, maybe… She doesn’t change on and off camera, she’s still just as loud and Essex-y.

You spoke about your relationship with Pussy Cat as soon as you sashayed into the werkroom – was this important for you to talk about on the show?

Definitely. I’ve got to rep her as well, behind every woman is a woman that’s greater. She has a part to play in everything I do, every decision goes through her, we do everything together so of course, I want to talk about it and let people know that. Otherwise it’s classic isn’t it? The guy gets all the bloody acknowledgement and the woman is just there. We’re a duo. She’s here right now actually!

Well hello! You can join in too. What kind of reactions have you both had from fans?

Pussy Cat: Really good. I can’t believe how many messages I’ve had from girls telling me that they didn’t think they could do drag and I have inspired them to do it, which is just so amazing. I never knew that that would be the case, but it’s really amazing, so lovely.

Scaredy Kat: It’s been very mixed, but there’s a lot of positive stuff saying, ‘I didn’t realise I could do drag because I’m bi, straight, because I’m a woman, because I’m too young.’ I didn’t think that was a possibility. If I can help people wanna do that and feel like they can, then that’s amazing. Obviously, there’s been controversial stuff as well, but that’s all good fun I think. Someone called me a “self-righteous breeder” which I might put on a t-shirt.

You might as well use the negativity comments and turn into merchandising right?

Scaredy Kat: Exactly, it’s got a good ring to it. That’s my new thing, ‘Scaredy Kat the self-righteous breeder.’

Pussy Cat, now that you’ve seen Scaredy on the show, have you decided if you would like to audition some day?

Pussy Cat: I don’t know if I would audition because I’m the type of girl to sit at home and cut my ear off, that kind of artist, rather than perform on the camera. I can’t sew, act or sing really, I’m much more of a creative in the background kinda person. I would love to see female drag queens on the show though, I would absolutely love that.

Realistically, do you think we’ll see a female drag queen on the show in the next few years?

Pussy Cat: I think so! RuPaul has said in an interview recently that he would definitely be up for it, so I’m hoping that they are all applying for season two!

Do you think audiences are ready for a cis woman to compete on Drag Race?

Pussy Cat: I think it would be controversial.

Pussy Cat: It would show diversity and the truth about what the drag scene is actually like.

Scaredy, would you come back for All Stars?

Yeah, give me a bit more money, a bit more time, definitely. Why not? It would be funny because I know how it all works now so I can infiltrate and fuck it all up.

Who was your pick for Snatch Game?

I was going to do Russell Brand, that would’ve been hilarious wouldn’t it? He’s basically a drag queen, before he became like… Gandhi.

Overall, what has the best part of the experience been?

I think the actual idea of the whole platform, being able to know that people are going to look at what we do and people are listening to us. Maybe we can make a change in the world with mental health, social media, the environment and animal rights. That would be amazing.

How do you think Drag Race UK will change the drag scene in the UK?

Ooh. Obviously, it’s going to create some sort of a divide, maybe a bit of conflict, like it has in the US. But then again, it brings a lot of attention to what UK drag has to offer and it will do a good job of showing the variety. Scary question that.

Who would you like to see walk away with the crown?

I’d love to see Divina win. That would be bloody brilliant.