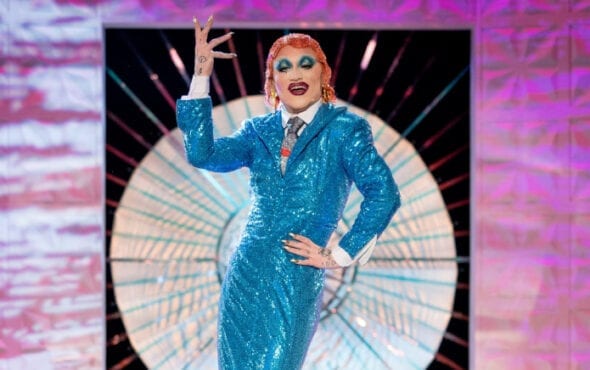 “Every time I’ve said this to any of the other girls they’ve gone, ‘Who?’”

Shortly after her elimination at the hands of Bimini in last week’s season two premiere, the star told GAY TIMES that she auditioned with “a few options”.

“I did Mystic Meg and Edith Piaf, but then someone in Canada did Edith Piaf, so I dodged that bullet as they did very well,” Joe admitted.

“Every time I’ve said this to any of the other girls they’ve gone, ‘Who?’”

However, Joe’s main pick was American actress Tallulah Bankhead, who rose to fame in the 30s and 40s with a plethora of appearances across film and Broadway.

She was known for her liberal values, as well as her romances with high-profile stars such as Greta Garbo, Marlene Dietrich, Hattie McDaniel and Billie Holiday.

“What I like about her is her voice. The last film thing she did was play Black Widow in the 1960s Batwoman. I love a raspy voiced woman!” Joe continued.

“Any woman that sound like they smoke too many cigarettes and smoke too much gin, that’s my kind of gal. I also considered Glenn Close.”

Joe also spilled the T on her elimination, which has been deemed one of the most controversial eliminations in Drag Race history. There’s even a change.org petition (!).

“I just stood there smiling like, ‘Mmm hmm. Mmm hmm. I don’t agree with this necessarily, but smile smile smile.’ Obviously, it’s about the queens and the show, but it’s also about the audience and how the audience reads things,” Joe added.

“The audience, from what I’ve seen online, very much disagreed with them as well! The audience are the ones to react to this, and they’ve made their feelings clear!

“Michelle Visage is apparently, I’ve been told on Twitter, no longer welcome in Brighton!”

You can read our entire interview with Joe Black here.

Next week, the 11 remaining contestants will star in Rats: The Rusical, with special guest star Sheridan Smith joining RuPaul, Michelle Visage and Alan Carr on the judging panel.

The first episode of RuPaul’s Drag Race UK season 2 is now available to stream on BBC iPlayer. You can watch the sickening trailer here or below.