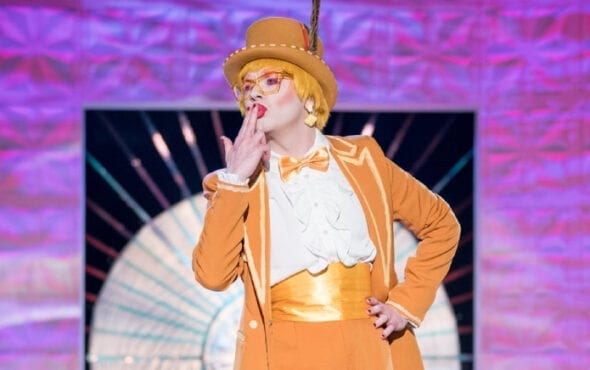 “I thought if she did have to speak, she’d be from Margate. Historical facts always get mixed up.”

The Worcestershire-born performer, who became the fourth contestant to sashay away from the second season of the UK spin-off, was torn between two characters in particular.

Although Ginny says fans would’ve expected her to embody Kathy Burke’s iconic character in Gimme Gimme Gimme, Linda La Hughes, or Sue Pollard, it was a “toss-up” between Cilla Black and – get this – the Mona Lisa.

“I’m very well known for doing Cilla, and I’ve got a song called Cilla Black – you should check it out, it’s quite controversial but I’m not editing it because it’s fabulous. I’m very known for singing my tribute to Cilla Black, so it was very obvious that my fans would push me to do that.

Ginny added: “But Mona Lisa, I don’t know. Something about that smile.”

When we asked Ginny how she’d execute the Mona Lisa on the Snatch Game panel, she responded: “Just a face, yeah. I thought if she did have to speak, she’d be from Margate. Historical facts always get mixed up.”

The star then teased how she’d approach a Margate-born iteration of the Mona Lisa: “’I was just on fackin’ holiday with me husband, I sit down and he says to me that he’ll do me picture by the pier. So, I fackin’ sit down.

“There I am, big smile on me face, I look at the picture and fucking hell. I don’t look like that! Look down, handbag’s gone. Da Vinci his name was – gone! I didn’t get no royalty, not one fackin’ bit.’” Ginny’s elimination on the fourth episode of Drag Race UK season left fans absolutely flabbergasted. Just seconds after her lip-sync against Sister Sister started, Ginny walked off the main stage and didn’t return. It was a first for the franchise.

In our interview, Ginny explained: “The reason I did it is because I had to stick with my integrity. I went onto that show to fuck it up, break the binary and to be punk. I didn’t want to fight, and also, I’m not gonna play the rules of the game.

You can read Ginny’s exit interview with GAY TIMES in full here.

On next week’s episode, the top eight queens get a shock announcement from RuPaul who tells them that, because of the coronavirus pandemic, they will have to “sashay away” until they can safely return.