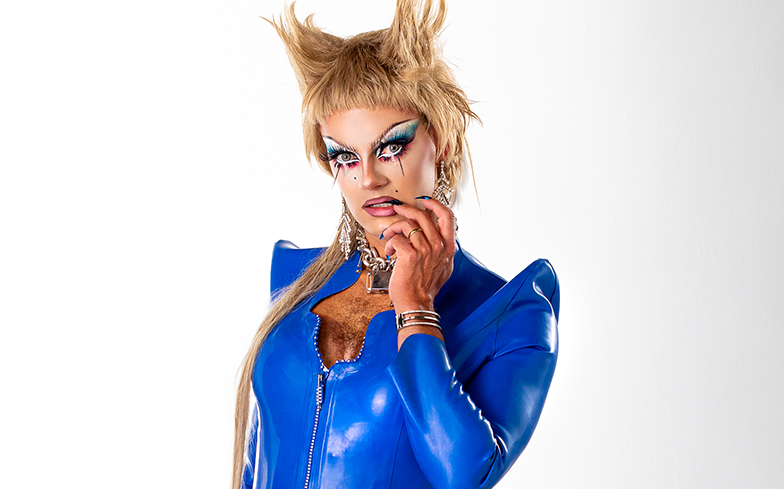 “I don’t think that was the reality of the situation.”

After five weeks of serving gender-fuckery with her sickening, high-fashion runways and almost mutilating herself on the main stage, Canadian queen Crystal was sadly told to sashay away on this week’s episode of RuPaul’s Drag Race UK.

The six remaining contestants were split into two teams with an epic girl-group battle, aided by Grammy-nominated singer-songwriter and producer MNEK, while Little Mix star and bonafide Drag Race superfan Jade Thirlwall made her panel debut.

Despite serving one of the most gag-worthy lewks ever seen on the Drag Race runway (facts are facts!), Crystal received negative critiques for her performance and faced-off against The Vivienne to Little Mix’s pop anthem, Power.

“When I realised it was going to be me and The Vivienne, I thought, ‘No chance am I staying, so…’ I did get a bit defeated, but I loved that runway too,” Crystal tells us. “I actually think the judges were just saying that because they needed to?

“I don’t know. I fully stand by that runway, it made sense to me.”

We caught up with Crystal to discuss her elimination, representing alternative drag and why the “competition element isn’t as important as the show”. Oh, and whether she’ll return for All Stars, of course. We wouldn’t let you down!

How are you feeling after your elimination?
I don’t think I’ve had a chance to process it to be honest! I feel overwhelmed and excited and sad.

Honestly, I thought you were amazing in the challenge? And that runway!
Oh thanks! I’m actually really proud of myself, I watched it back – and obviously I knew I went home – and I thought, ‘God, I must have really fucked that up.’ But watching it back, I’m like, ‘I was fine!’ But you know, two people did need to be in the bottom and when I realised it was going to be me and The Vivienne, I thought, ‘No chance am I staying, so…’ I did get a bit defeated, but I loved that runway too. I actually think the judges were just saying that because they needed to? I don’t know. I fully stand by that runway, it made sense to me.

It’s difficult, because at this point no one does bad…
Yeah, totally. The only thing I’ll say about that runway is that when I came home, season 11 was airing. A week later, they did the Facekini challenge. I was like, ‘Oh, maybe the judges are over this because they’ve just done a whole challenge on this last season.’ Obviously, I hadn’t seen that or known, so it was just bad luck.

Do you think the runway aspect actually plays a part in the judge’s critiques? Because you’ve provided two of the best Drag Race looks in HERstory two weeks on the trot.
Oh, thank you! People always say that it’s about 80-20, but I think a really good runway can save you if you’re like… bottom three? I think a really good runway can give you the win if you’re top two. I think it’s used a tie-breaker rather than an actual thing, unless the whole challenge is about the runway.

Last week you nearly killed yourself on the runway! I thought you’d be safe for sure.
[Laughs] When I found out that that runway was going to be the same time as Snatch Game, I was so relieved because I thought, ‘At least I’ve got something cool to wear and maybe it’ll help me scrape through.’ But it’s a reality show, what I’ve learned is that the competition element isn’t always as important as the show itself.

Throughout your time, you have become quite the fan-favourite – did you expect this kind of reaction?
I mean… I don’t know if that’s actually true!

It’s absolutely true.
I’ve had so much love and attention but I don’t know if that’s actually a thing. People say they’re rooting for me and stuff, but it’s hard to know. The reaction has been so so so positive and I was expecting a lot more shit and hate-mail and all sorts of things. A lot of dick pics! A lot of unsolicited dick pics. A couple a day.

And how do you respond to that?
I take a lot of a screenshots and don’t reply. It makes me laugh.

You were the gender-fuck queen this season, you gave the Drag Race franchise something we’ve not really seen before – was it important for you to showcase this side of drag?
Yeah, absolutely. I wasn’t sure if the judges would ask me to shave my chest, and I hadn’t decided beforehand whether I would or wouldn’t. Thankfully, it became a talking point for a little bit and then people were just like, ‘Okay, cool. Fine, whatever. No big deal.’ So I think that’s really cool and that’s made progress. The idea that I’ve become the pinnacle of alternative drag is kind of laughable, because when I look around at the queens I work with in East London, I’m the least hairy queen that I know. There’s back hair and all sorts, so I don’t see myself as a hairy queen, but I guess in the context of the show I am. For me, it’s not about polish, even though I think my looks are polished. From my point of view, it’s not about impersonating a woman.

Was there anything on the show that didn’t air that you would’ve liked audiences to see?
Hmm… I think they keep the best bits in. The only thing, watching back last night… that episode was probably the most fun I had on the show. Me, Cheryl and The Vivienne actually worked really well together, had fun and really enjoyed ourselves. So even though the bitchy comments were cut in, I don’t think that was the reality of the situation. We were all really supporting each other and we helped each other out. It ended up looking like I was bothered by the group, but in reality, we were all in it together. It made good TV!

Can you believe the song is in the top 20 of UK iTunes?
[Laughs] Really? Awesome! But not the Filthy Harmony version? Justice for Filthy Harmony!

You were eliminated in sixth place, which kinda guarantees a spot on All Stars – you down?
Absolutely I would. Of course I would! Knowing now what the show is and what it’s like, I’d be able to go in with a much more playful and fun and relaxed energy. The thing that held me back was the fear and the anxiety of the unknown, and how I was going to come across, and what they wanted from me. Once you’ve done it, you realise, ‘I can do it again and I can do  much better job.’

What has been the best part of your experience?
The dick pics. No, it’s given me a whole new level of confidence and it has really helped me to level up my drag. I’m a whole new performer. You don’t want to go onto Drag Race to learn how to do drag better, but it was the case for me. It’s been an amazing learning experience.

Are you going to follow in the footsteps of your fellow queens with a single?
[Laughs] Absolutely fucking not.