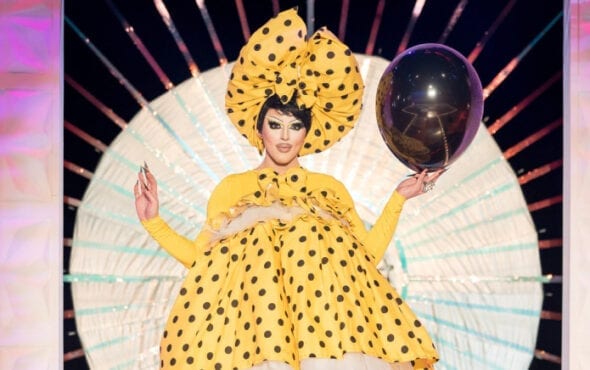 Cherry Valentine has revealed her pick for Snatch Game.

On last week’s episode of RuPaul’s Drag Race UK season two, the Manchester-born entertainer failed to impress the judges with her performance in Rats: The Rusical, and was sent packin’ after a powerful lip-sync showdown with Tayce.

This means Cherry won’t be able to flex her comedic chops for the franchise’s staple maxi-challenge, Snatch Game, which sees the contestants impersonating celebrities in a parody of the Match Game.

Speaking with GAY TIMES after her elimination, the star shared the two British icons she was torn between.

“It was a mix between Gillian McKeith – do you know when she did I’m a Celebrity? – or Nikki Grahame in the Big Brother house,” she revealed. “It was going to be how I felt in the moment!”

Cherry continued to say that she’ll “probably” upload a video as both Gillian and Nikki to social media, adding: “I had so many plans for it. It was going to be a gag!”

The star also delved into her emotional scene with fellow contestant Sister Sister, which saw her discuss the toxic masculinity within the travelling community and how her upbringing impacted her as an LGBTQ+ youth.

“It was one of the main reasons that I went on the show, to talk about where I come from and who I am. But, I didn’t expect it to come out as emotional as it did,” she admitted.

“I was like, ‘Oh shit, I’ve never actually spoken about this before,’ and maybe I should’ve thought about that before I started talking about it on TV! I’m glad that I did talk about it, and I’m proud of everything that I said.”

You can read our entire interview with Cherry Valentine here.

Next week, the ten remaining contestants will see their creative sewing skills – and their friendships – put to the test as they compete in a design challenge called Who Wore It Best?

RuPaul, Michelle Visage and Graham Norton will be joining by supermodel Jourdan Dunn.