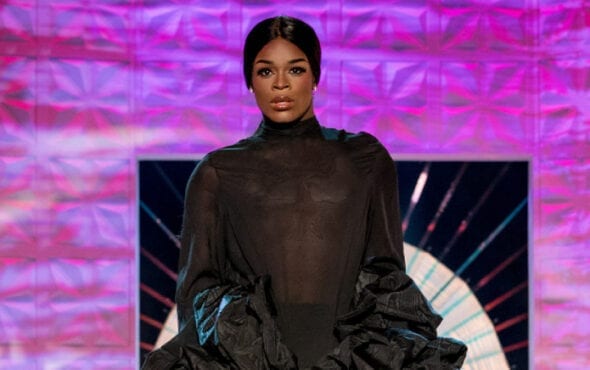 Asttina Mandella’s Snatch Game character would’ve been one of the most controversial choices in herstory.

The East London-based entertainer, who sashayed away from RuPaul’s Drag Race UK season two in tenth place this week, told GAY TIMES that she had three solid options for the staple maxi-challenge.

“I had a few plans, but I was either going to do Mel B – she’s from Leeds and so are my drag mother and dad – or Ricky Thompson,” Asttina revealed after her elimination.

“My third one, because I look like her and it would’ve been nice and controversial, was Azealia Banks.”

When Asttina made her audition tape for the series, she tried on Azealia’s classic ensemble from her 212 video – complete with pigtails and the striped jumper – and was shocked at the resemblance.

“I was like, ‘This is really creepy!’ She’s just very controversial, even though her music is amazing. The gays love it and I love it, but she’s so controversial. It would’ve been a nice way to play it,” added Asttina.

“Also, she’s not funny, but what she says makes you piss because she says some stupid things. It was going to be a test on me to try and make someone who is, not hated, but is a taboo person.”

When we asked Asttina if she would’ve been prepared for a hostile response from Azealia on social media, the star didn’t hold back.

“Babe, criticise me all you want. It just means you’re a keyboard warrior and you’re pressed,” she said.  “That’s the thing. You’re literally sitting there, angry, feeling some type of way, and typing on a phone.

“If I’m affecting you that much, good, because you have nothing going on in your life. Read a book!”

For their third maxi-challenge, the queens joined forces with their best Judy in a design challenge called Who Wore It Best? Asttina used the opportunity to showcase her love for cartoons and anime, but ultimately, her ensemble was criticised by the judging panel as too “simple” and “disappointing”.

Although Asttina is one of the fiercest entertainters the franchise has ever seen, she was bested in the lip-sync smackdown by Tia Kofi to the beat of Dua Lipa’s disco anthem Don’t Start Now.

You can read Asttina’s exit interview with GAY TIMES in full here.

Next week, the top nine queens will present in their own daytime magazine show, Morning Glory. Ru, Michelle and Alan Carr will be joined by the queen of British daytime television, Lorraine Kelly.