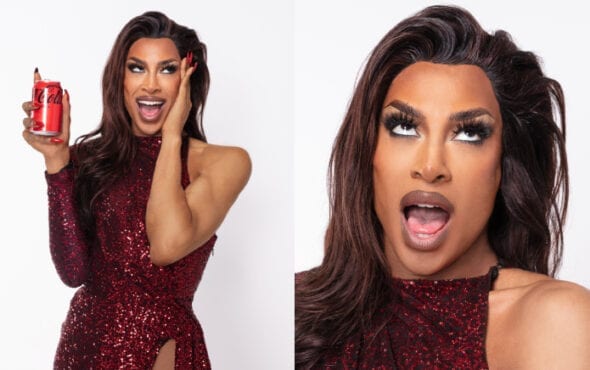 Tayce has become the new – in the immortal words of Bebe Zahara Benet – “face, face, face” of Coca-Cola.

The legendary entertainer is one of the new representatives for the brand’s campaign, Open That Coca-Cola, which is all about that indescribable and delectable feeling of drinking a cold can of Coke.

“Everyone knows me as that queen that’s bubbly, unique and hard to describe – just like the taste of a Coca-Cola!” Tayce said in a statement. “Honey, that first sip is enough to make you say ‘OOOH!’”

The queen, who recently rose to fame as a contestant on the second season of RuPaul’s Drag Race UK, is joined by other famous faces such as Nathaniel Hall, Lady Leshurr, Rina Lipa, Roman Kemp and Saffron Barker.

The photo series, from Anaïs Gallagher, captures the reactions of the aforementioned stars as they Tayce the beverage.

“Working with Coca-Cola on this shoot was such a fun challenge,” said the photographer. “I got to use my artistic outlet to bring to life a sensation that’s impossibly hard to put into words. So instead, we captured it in images!”

Hall, known for his HIV/AIDS activism and his role as Donald Bassett in It’s A Sin, said: “Communicating the feeling of drinking a Coke through facial expressions has been so much fun. And no acting required!”

“From the anticipation of the first sip, to that initial taste, all the way to the bottom of the can- it’s a sensation like no other. We’re excited to be partnering with six creatives to bring that unique feeling to life in such a visual way.”

You can check out Tayce’s fierce photoshoot for Coca-Cola below. Tayce won the hearts of viewers around the world with her appearance on RuPaul’s Drag Race UK.

Although the Welsh diva participated in four lip-sync smackdowns, she proved to be one of the most sickening entertainers the franchise has ever seen thanks to her flips, kicks and tricks and captivating stage presence.

She also bing, bang, bong’d the UK Singles Chart as a member of the United Kingdolls for their infectious, RuRuvision anthem UK Hun.