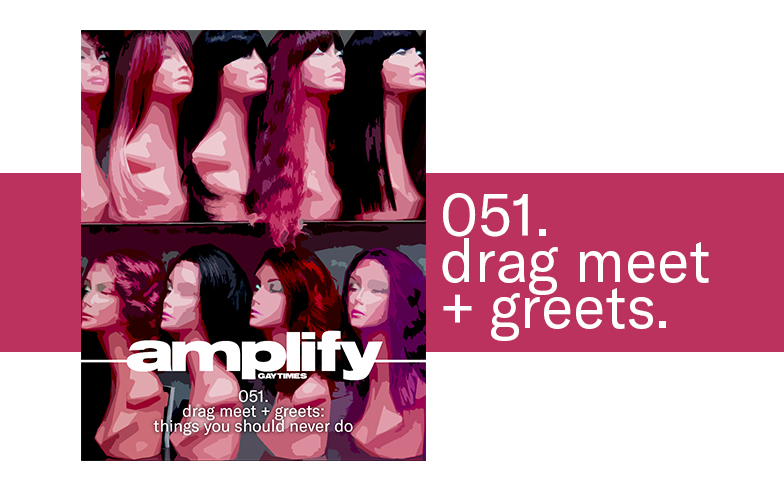 “I mean… I don’t think fans should pee on you or anything.”

With the rise of drag-themed reality competition shows like Dragula and the multiple Emmy Award-winning phenomenon that is RuPaul’s Drag Race, meet and greets have become an essential (and lucrative) aspect of a drag queen’s job.

Whether it’s at their local shows, worldwide tours such as Werq the World or drag conventions like RuPaul’s DragCon and DragWorld, fans have been sashaying and shantaying in hoards to meet their favourite drag performers.

But just because you’re giving them coins, doesn’t mean boundaries don’t exist. At the first ever DragCon UK, we asked 12 of the most legendary queens from Drag Race HERstory what you should never do at a meet and greet.

“Hug you through the neck is a no no in a meet-and-greet. We all have fake hair, and pulling your hair back is crazy. I wear my own hair, so normally when someone hugs me and put their arms around my neck it pulls my hair. We all look crazy.”

“I think it’s always nice to go up to a queen and say, ‘May I give you a hug?’ or ‘Would you please sign this?’ But if you’re new to drag, consent is always fun. For drag queens, touching stuff… like we’ve paid a lot of money for it, and we care a lot for it, so asking to touch it is always nice, nicer than just going in for the kill.”

“Oh gosh, I mean… I don’t think fans should pee on you or anything.”

“I would probably say a fan should never grab their hair or touch their makeup with their fingers. A little air kiss or a mwah mwah is fine, but that’s probably it. I don’t mind people touching me, but the hair and the makeup… I don’t mind kisses on the cheek, I set my face with setting spray! As long as it’s not a wet and sloppy kiss then it’s fine.”

“Honestly, I take everything as it goes. I don’t wear long wigs during meet and greets because it gets pulled off when we give hugs. So be mindful of the hugging. Watch the hair… and only air kisses!”

“If queens are wearing long hair and you go in for a hug, sometimes you forget and it starts to pull. That’s difficult. Other than that, I’m really big on hugs. I think it’s great and I love to see everybody so excited to see one another. Come as you are, be happy. DragCon is just a celebration of everyone coming together. Yes, you are going to be buying some merch and all that stuff, but just have a good time and be good to each other in the lines because it can get rough.”

“I’m very short, so me personally, do not hug me above the shoulders because it pushes my hair, it smudges me. Just be conscious of my tiny, elf-like body!”

“One thing fans should never do in a meet and greet is put your arm over the shoulder of a queen. You’re grabbing her hair, it’s a long day and you might be sweaty under your arm… and then they’re stuck with your sweat stain on their shoulder pad. It can be a little unsavoury… So always ask before you wrap your arm around a queen.”

“Rub my face. They love it. Yes, they do that. Normally queens say, ‘Don’t pull my wig’, but for me it’s like, ‘Don’t touch my face, or I will punch you in the face.’ Just kidding! I’m not that mean.”

“Never touch a black woman’s hair. You just wouldn’t do it. Keep your hands behind your back, young man! Just be nice, if you see someone walking through and they’re going somewhere, just respect that they’re going somewhere and they will be back at the booth to take pictures and whatnot. Knowing the boundaries.”