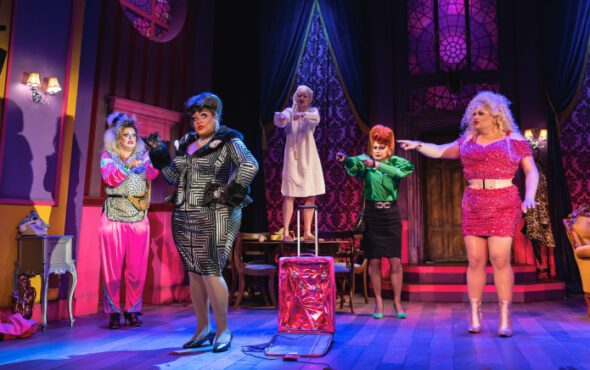 We’re big fans of Death Drop – the hilarious whodunnit, written by Holly Stars, has played in London twice before and has also toured the UK. A whole variety of well-known drag artists, including RuPaul’s Drag Race alumni, have featured in various iterations of this show previously – including Willam, Courtney Act, Latrice Royale, Monet X Change and Ra’Jah O’Hara. Back on London’s West End, in a new home at the Criterion Theatre, the show now stars Jujubee and Kitty Scott-Claus in the lead roles, with Vinegar Strokes returning as The Lady (having previously been in the original run and the touring production).

One of the things we love about Death Drop, though, is that it’s very much not just about the Drag Race queens. Sure, they play main characters – although the cast is relatively small, so everyone plays a fairly major role – and receive a loud cheer for their respective entrances, but the play doesn’t lean on Drag Race at all. Sure, we’re all expecting Jujubee – playing weather girl Summer Raines – to make a ‘sensible 74’ joke in relation to the temperature, and Kitty goes a bit GC here and there, but those aside there aren’t really any references. We also love that this is a show which celebrates a diversity of drag excellence – it’s as much about the kings as it is about the queens, here.

While there isn’t a weak link in the cast, a handful of performances stood out for us. We were really impressed with Vinegar Strokes this time around – during the initial run we felt her performance lacked confidence, but this time around she delivered an assured turn, full of brilliant physical comedy. We adored Georgia Frost playing Phil Maker – the aptly named film maker – who pulled no punches in their portrayal of toxic masculinity. The show’s writer, Holly Stars, has – perhaps unsurprisingly – given herself quite a few of the biggest punchlines; her performance as the three Bottomley triplets is frequently scene-stealing and utterly hilarious. Having showered the show with praise – we had a couple of minor issues. Some of the cast has changed and, unsurprisingly, some of the interpretations of the roles have, too – most work well, but some feel like they need a little longer to develop and then find their fit within the unfolding chaos on stage. Additionally, we noticed a handful of sound issues – presumably teething problems in a new venue, but we spotted that a couple of genuinely brilliant punchlines (some wonderful jokes that we remembered from before) didn’t really land because we couldn’t hear them properly. We’re sure these will both be fixed in time as the run progresses.

Neither of these particularly marred proceedings and we still had a great time – Death Drop is one of the best nights out you can have in London right now. It’s high-camp, it’s silly, it’s chaotic, it’s gross, it’s genuinely very funny – what more could you want? It’s only in town for a limited run so make sure to pick up a ticket – there’s nothing else quite like it.