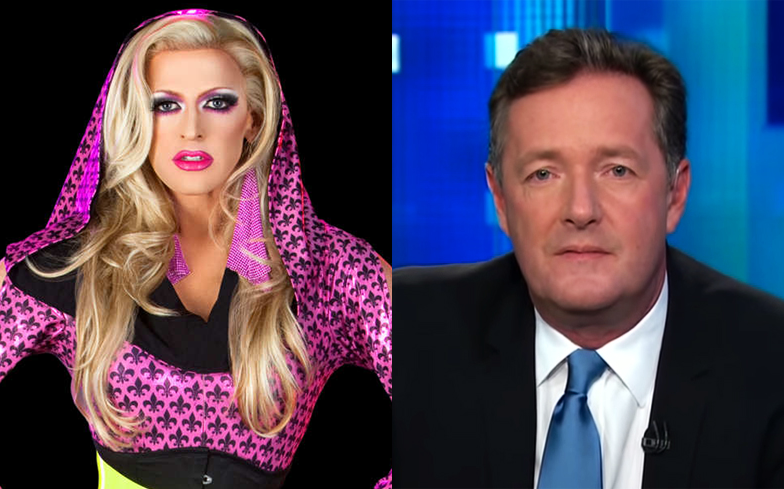 Pandora Boxx has become embroiled in a Twitter feud with Piers Morgan.

The Drag Race star – who appeared on the show’s second season – hit out at the Good Morning Britain host after he criticised American politician and activist, Alexandria Ocasio-Cortez, for a tweet she made in regards to Ivanka Trump.

“It may be shocking to some, but being someone’s daughter actually isn’t a career qualification,” she wrote about the American businesswoman after she was pictured talking to Emmanuel Macron, Theresa May, Justin Trudeau and Christine Lagarde.

Alexandria continued: “It hurts our diplomatic standing when the President phones it in & the world moves on. The US needs our President working the G20. Bringing a qualified diplomat couldn’t hurt either.”

Piers quoted Alexandria’s tweet and shamed her for holding down a job before her days in politics, saying: “Could be worse… Ivanka could have been a bar-tender 18 months ago.” He really thought he was doing something, huh?

I mean. I wish I could live in your privileged world where you feel you can legitimately say this.

Wow. So the minute @piersmorgan called me a racist I was bombarded by homophobic, bigoted, hateful insults. It was all from me calling him out for insulting @AOC for being a bartender at one point in time. If I didn’t understand his “fan” base before, I get it now. pic.twitter.com/6Nl43YgDL6

Because Piers loves a Twitter feud, he responded with one word, “racist”, which led to fragile white supremacists and Piers-fans spamming her on social media. “Every straight male that sees this will no longer help you out,” said one user.

Pandora then hit back at the media personality: “I mean. I wish I could live in your privileged world where you feel you can legitimately say this,” to which he replied: “Abusive racist now plays the victim… comical.”

After their Twitter spat calmed down, Pandora told fans that she ‘regrets’ some of the phrasing in her original tweet, but did so because people like Piers “anger me with their entitlement and privilege”.

Throughout Alexandria’s political career, she has expressed support for defunding and abolishing the U.S. Immigration and Customs Enforcement and championed for free healthcare. She has also been a staunch supporter of LGBTQ rights.

She helped raise money for UK-based charity for trans children, Mermaids, and once said of transgender rights: “It’s a no-brainer – trans rights are civil rights are human rights.”

Alexandria is the politician we need and deserve right now, so we applaud Pandora.