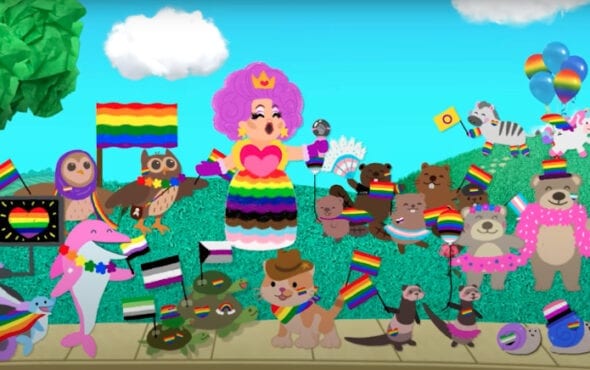 In the LGBTQ+ special, titled The Blues Clues Pride Parade Sing-Along, the beloved dog and an animated Nina host a parade that celebrates the queer community.

The video was uploaded to the series YouTube channel on Friday (28 May).

In the clip, Nina is leading a Pride parade while dressed in a rainbow ensemble and colourful make-up. The Drag Race contestant then sings a song highlighting different LGBTQ+ families.

“This family has two mommies, they love each other so proudly and they all go marching in the big parade,” Nina sings.

Nina concluded the track with the lyrics: “Love is love is love you see and everyone should love proudly.”

Nina took to her Instagram to share her excitement about the Pride-themed episode, stating: “Is there a better way to kick off Pride Month than with my pal, Blue?!”

She continued: “No way! Singing and dancing in the streets celebrating Pride is so much fun, especially with all of our new friends! Check out the full video at the link in my bio! HAPPY PRIDE!”

This isn’t the first time that the Blues Clues series has showcased LGBTQ+ inclusion.