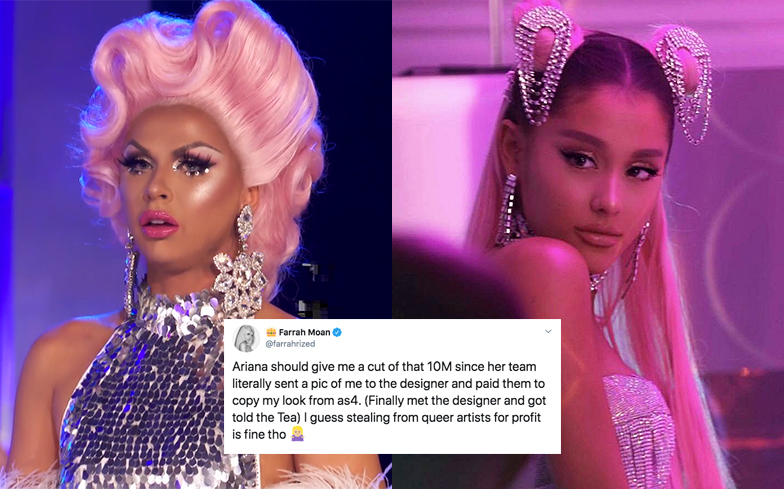 Farrah Moan has accused Ariana Grande of copying her look.

The Drag Race superstar, who appeared on season 9 and later All Stars 4, took to Twitter this week to call out Ariana after a designer told her that the pop singer’s team had allegedly requested a recreation of one of her outfits.

The look in question was Farrah’s entrance outfit from All Stars 4, which is very similar to an outfit worn by Ariana in her viral smash hit 7 Rings music video.

After news emerged that Ariana was suing Forever 21 for $10 million for using a model with an “uncanny” resemblance to her and her outfits in the 7 Rings music video, Farrah decided to share her own story on social media.

“Ariana should give me a cut of that 10M since her team literally sent a pic of me to the designer and paid them to copy my look from [All Stars 4],” she wrote.

“Finally met the designer and got told the tea. I guess stealing from queer artists for profit is fine though.”

“The main people at fault here are her team. If that queen didn’t recreate it, they would’ve found someone who would,” she wrote.

“When your team makes a mistake, it falls on you. [I don’t care] what the lawsuit is really about, her legal team is accusing theft of likeness, image, whatever.

“But the point is her team also stole. You can attack me all day but it’s not gonna change anything. I can admit I was petty with that gif I posted and I’ll apologise for that but at the end of the day they did what they did.

“[I don’t care] about suing anyone, just needed to put this out there.”

It’s not the first time Ariana’s 7 Rings has faced controversy. Back in January, rapper Princess Nokia accused the singer of ripping off her song Mine, while Soulja Boy claimed she copied his song Pretty Boy Swag.

Related: Farrah Moan has something to say about Drag Race All Stars 4