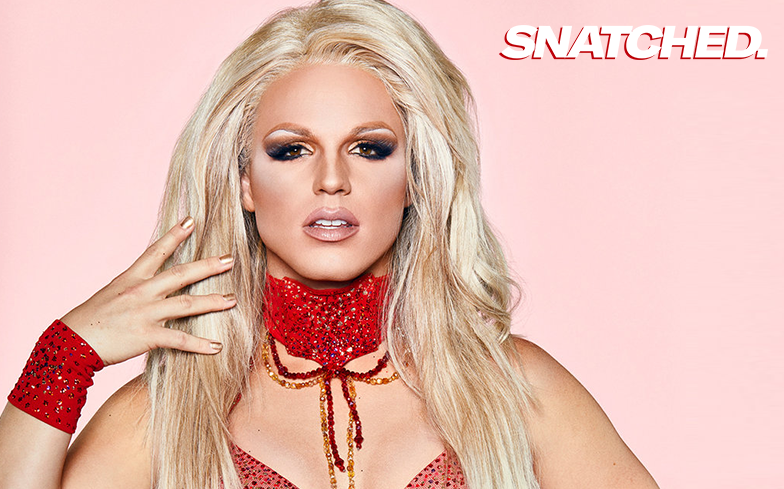 “How exciting, nobody was killed. We should be celebrating!”

Back in 2016, Derrick Barry historically became the 100th queen to sashay into the Drag Race werkroom. Ahead of her debut on the Emmy Award winning series, the Las Vegas performer was touted as a massive competitor for the crown. After all, she had been in the industry for over ten years (she made it to the quarter finals of America’s Got Talent) and was renowned by many as the fieeeercest Britney Spears impersonator in the world.

Derrick was ultimately eliminated in fifth place, but like many contestants before her, she’s gone on to have major success on tour and in her own web television series with fellow Drag Racer, Kimora Blac, called Wait, What? Later this year, the star will make her DragWorld UK debut, so we caught up with the fan-favourite queen to discuss her controversial – yet viral – comment about Stonewall, the lack of queer education in schools, and of course, to ask if she’ll return for All Stars.

Are you excited about making your DragWorld debut this year?
I am! It’s my debut, the only thing I’ve done similar to this in the UK was DragTech and that was in Manchester a couple of years ago, so I’m very excited to come back. London is my favourite city there, I just love London so much.

Tatianna is also attending – can we expect some kind of Britney double act?
We have been known to do that in the past, so I would never say no to that! I love working with her, I think she’s a fantastic performer and even better, she’s a fantastic person. We’ve known each other for almost 10 years now and I just adore her.

You were on Drag Race three years ago, how has life been for Derrick Barry since then?
Oh my gosh, well I’ve travelled the world even more than I did with America’s Got Talent, so that really shows what the series can do. It was Drag Race that brought me to London for the first time, and I’ll forever be grateful for opportunities like that. It puts you in front of a wider audience and opens you up to new markets. America’s Got Talent was in 2008, so when I did Drag Race, it was eight years later, and people grew up a lot in that time period. There’s people that never even saw me on America’s Got Talent that have now watched me on Drag Race and become new fans.

During your time on Drag Race, we started to see a new Derrick Barry. How would you say you’ve changed since your stint on the show?
I learned that it’s okay to take risks that are not always going to take off, but the end result is going to teach you something more valuable than you ever thought possible. I definitely learned what eyebrows I don’t like, and I’m glad the world got to watch that evolution! More importantly, I realised that it’s okay to have a niche. I love impersonating Britney Spears, and that’s what’s allowed me to travel the world. Of course I enjoy doing music, singing or lip syncing to other artists, but there’s nothing quite like I do with Britney. I also love doing Mariah Carey, and it’s because of Drag Race that I had an opportunity to impersonate her, in front of her on Watch What Happens Live. She even said, ‘I bet you do Britney!’ I said to her, ‘How do you know that?’ And she said, ‘You look like her!’ To meet all these celebrities and to have Madonna call me ‘Britney Bitch’ on stage… It’s like, this is what I do, this is my craft, and I’ve already honed it. With opportunities like Wait, What? – which we’re on season two filming right now – it gives me a chance to try different drag looks, looks that aren’t Britney replicas. The thing is, I don’t want to change my face, I was very lucky to look like Britney and if I change my face, then that’s not true to who I am as a drag artist. People are always going to compare, they like to say, ‘Oh well Derrick looks like Courtney Act and Blair St Clair’ and so on, and it’s just always going to go down the line. That’s okay, I’m not mad about that. I think it’s fascinating that people are so invested in the show, and as long as they’re watching and talking about me, I can’t complain! With a show like Drag Race, that has such a large international following, there’s going to be a lot of love, but also a lot of negativity. Some fans can be crazy…
I dealt with that back in 2007 when I started a YouTube channel, and people told me I couldn’t dance, I was ugly, I was fat, I didn’t look like Britney. I’ve always said that if I only get 1% of the negativity that the actual artist gets, how lucky am I? The real Britney is out there with 40 million followers on Instagram. It’s like when Cardi B came out and people were mad at Nicki Minaj. They’re always going to do that because it’s just what they were taught to do, people were unfortunately taught that they were supposed to voice their opinion, and their opinion matters. I was brought up differently. If you don’t have anything nice to say, don’t say nothing at all. That’s how I do online. I leave positive comments for the Drag Race girls and other celebrities – that’s it. I’m here to uplift people and not tear anybody down, unless I’m competing against them for $100,000… then all bets are off.

You’ve really embraced your status as a meme queen. Did you expect your Stonewall comment to blow up as much as it did?
How exciting, nobody was killed. We should be celebrating! I knew that after I had said that, that it was going to be taken both ways. I knew people were going to find it offensive, funny, whatever it is. The thing is, it’s not something that I learned in school. We didn’t talk about Stonewall. I didn’t grow up in gay culture, I didn’t come out until I was 20 and living in LA. It’s something that I’ve known about for years, but didn’t have all the details. I definitely spoke out of turn, but it brought such a conversation to people that may have never even heard of Stonewall. It’s been 50 years now, and look at where we are now because of that day, or because of those two days and the fight that we have to endure since. Yes, maybe nobody was killed at Stonewall. But look at all the lives that have been lost in the fight for gay rights and the trans lives, like Matthew Shepard. I’m glad they’re touching on that on Drag Race, because these important things need to be talked about.

I have to ask: can we expect a future appearance on All Stars?
I will never say no to Drag Race. I’ve learned that saying yes in life brings so many opportunities. The best advice I ever got on America’s Got Talent was to ‘show up’. It changed my life. So that’s how I look at anything Drag Race related. If they call me, I’m there, because I love being part of the franchise. I’ve learned so much and I’m honoured to be invited back for season 11. There was 30 of invited to return for the season 10 premiere episode, and I was one of them. Then for them to cut it down to 15 for the season 11 premiere… what an honour. To have RuPaul say, ‘I brought back my favourites’ and to be in that category, that’s all I needed to feel validated and accepted from not only the Drag Race franchise, but the producers, directors, creators, and obviously Ru, number one.

Would you be happy eliminating queens in the All Stars format?
I like that they give you a bottom two and then you choose from that. They are making your opinion valid and it also makes the contestants want to strive to do their best. I mean, everyone likes it better than season one because if you make it to All Stars, it needs to have a level up, and I think it’s a great way to do it. It really keeps everyone on their toes to perform better.

Who would you like to compete against?
I love Kim Chi so much, and I really bonded with her on my season. I love her drag, I think she’s an incredible artist, and she’s a lot of fun to be around. From other seasons, I really like Shea Coulee and I think she’s so innovative in this business. She’d do extremely well. I’d also love to see Kimora Blac because we had the best time filming Wait, What? Her fashion sense… it’s just a cut above. She is the Kim K of drag, and she knows that. I get to be Britney, she gets to be Kim, it’s perfect. I feel like we went through something together, even thought it wasn’t on the same season, it was a year apart. It’s been a fun ride that we’ve bene on with World of Wonder. I mean, our show is listed second under ‘comedy’ for the World of Wonder app, right behind Trixie and Katya, who have incredible chemistry. They’ve been on Viceland and have amazing opportunities coming their way. They’re standout stars from Drag Race. Trixie was number one on iTunes and her documentary is headed to film festivals. That’s an All Star, someone that can go on the show, not make it all the way and then just blow up later on with their talent and brand. Trixie and Katya have both done that in my eyes.

What else can we expect from Derrick Barry within the next year?
Since Britney is celebrating 20 years, I really want to get a show together. I’ve been working on it for a while and it’s celebrating Britney through the eras, so there will be songs from each album, costumes from each album, tours from that era. I just want to remind people why Britney is so iconic and the most beloved pop star. To get to do what I do is such an honour.

Derrick Barry will be at DragWorld UK this August! For your chance to meet her in person, make sure to buy your tickets here.