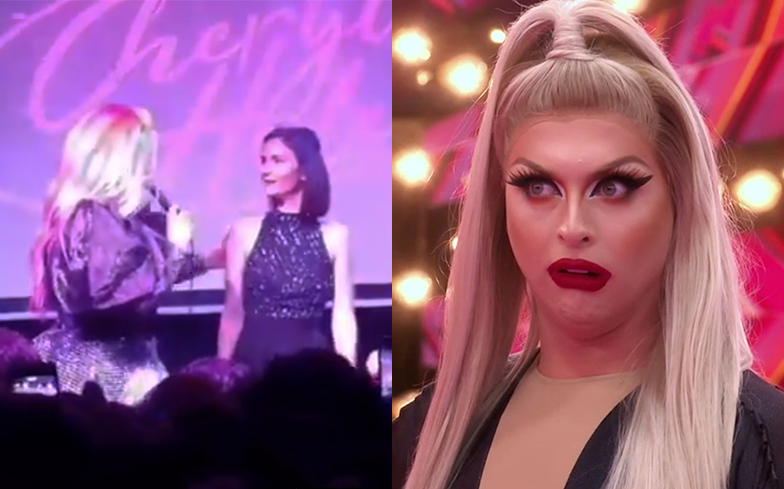 NEWSFLASH HUNTIES: Don’t disrespect Cheryl Hole on her own mothertucking stage because she will call you out.

At a show in Bristol, the Dancing Diva of Essex invited an audience member up on stage to perform with her as part of the Frock Destroyers, but things took a nasty turn when the ‘fan’ proceeded to shove Cheryl for no apparent reason.

Footage shows Cheryl attempting to reason with the unidentified person, before she becomes aggressive and starts poking the Drag Race UK star, to which she hits back: “Do you really wanna fight me bitch? I don’t fucking think so!

“At the end of the day darling, this is my show, I invited you up on my stage as a courtesy – to let you have a moment, diva. The fact that you thought it was okay to shove me, not just as an artist, but as a person is not okay.

“I do this at every single motherfucking show I do, we are here for a good time and a good time only, okay?”

After the show, Cheryl addressed the incident on Twitter, writing: “To the lady I invited up to perform Break Up with me that then shoved me on my own stage, don’t think that is appropriate to act like that with any human being.

“We are all here for a good time and I don’t want any negativity in the venue, let alone on the stage during my number.”

It’s been said many times before but it bears repeating: DRAG IS NOT A CONTACT SPORT. Respect the boundaries of drag performers and do not, by any means – and this goes without saying – get physical when them on their own stage.

Fans praised Cheryl for how she handled the situation.

“You handled it spectacularly well, heres to an amazing second half, you’ve been smashing it so far,” tweeted one fan, while another wrote: “You dealt with it so professionally! Please know it’s not a representation of Bristol!”