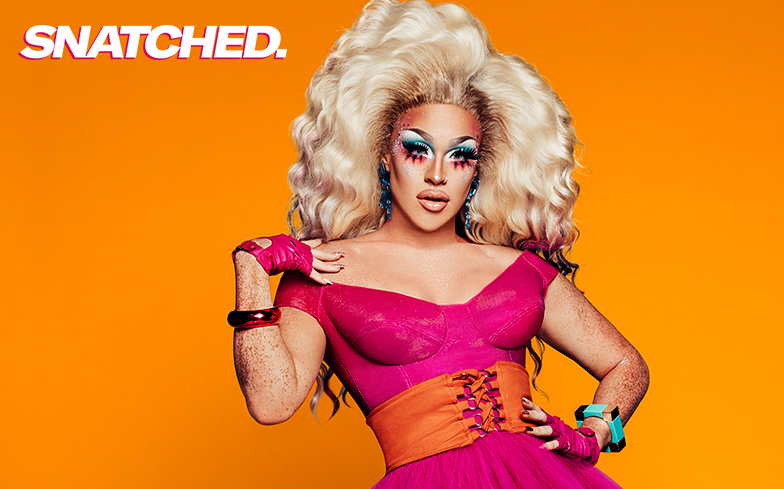 “If I had kept my land legs and not become a mermaid during my lip sync I would have had a better chance of staying.”

Self-described “Bratz doll” Ariel Versace sashayed into the Drag Race werkroom earlier this year with high expectations from the fandom. After all, the New Jersey born performer boasted the highest amount of Instagram followers and was known in the industry for her sickening wig skills.

Unfortunately, Ariel’s time was cut short on the series after failing to deliver in the Monster Ball. The queen found herself in the bottom two with Shuga Cain, and memorably tripped during the performance – which Ariel thinks prevented her from advancing further in the competition.

“Honestly I really feel like – and a lot of fans have expressed – I slayed that lip sync,” she tells us. “Ru says don’t fuck it up and lo and behold, what do I do? But I just had to keep moving. When you fall down you just have to get right back up!”

We caught up with Ariel and discussed her elimination, breaking the stereotype of being an “Instagram queen” and a potential appearance on All Stars 5.

Hi Ariel! How are you feeling after your elimination?
I feel good. I’ve been getting nothing but support so that makes me feel really good. I know I just have to keep doing my thing that I have always been doing and I am just really excited to reap the rewards of hard work. You fell on stage – what was going through your mind as you were performing?
Oops! [Laughs] Ru says don’t fuck it up and lo and behold, what do I do? But I just had to keep moving. When you fall down you just have to get right back up!

Was it hard waiting for that moment to air?
Yeah it was definitely hard. It just felt like this nightmare because it was so long ago. But when it finally aired it was not as bad as I thought.

Do you think if you hadn’t stumbled on stage, that you might still be in the competition?
I do! Honestly I really feel like – and a lot of fans have expressed – I slayed that lip sync. I mean you never know what is going through anyone’s mind. If I had kept my land legs and not become a mermaid during my lip sync I would have had a better chance of staying.

We have to ask: who were you going to do on Snatch Game?
Miranda Sings or Jennifer Coolidge.

Do you think you’ve broken your stereotype of being just an “Instagram queen”?
Yes and no. People that support me see that I have more to offer than just pictures online, but you are always going to have people that hate. But you can’t focus on that! So it is super important to focus on the positive and not the negative. Just pay attention to the people that support you and want you to move forward. What has the reaction been like from fans overall?
Really good! A lot of the comments are like “Ariel for All Stars 5” and obviously I would love the opportunity to do it again. I thought I was ready for season 11, and I do think that I am a polished queen, but it is so crazy how you can improve in such a short period of time, and at this moment I feel like I can slay even harder.

Who are you rooting for to win the season?
Myself on All Stars 5!

And what’s next for Ariel Versace?
I am really looking forward to DragCon, slaying the booth, and meeting all of the people that support me and around that time, I am also going to be dropping some music so I am also really excited for that.