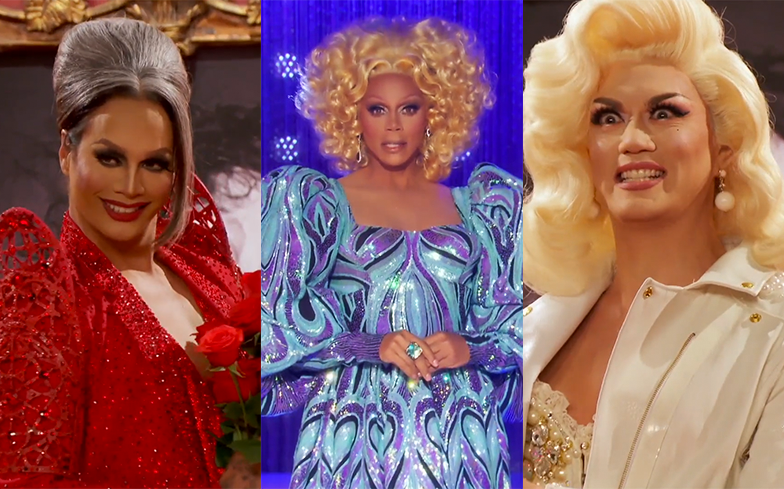 After a two week break, RuPaul’s Drag Race returned to our screens last night with its largest cast to date.

After a “hello, hello, hello!” and an introductory welcome from Mama Ru (as per), the queens were tasked with their first mini-challenge: to strike the most sickening pose with some of the most legendary queens throughout Drag Race HERstory.

Silky was deemed the winner of the challenge after a gag-worthy shot with Mariah. RuPaul then revealed the first main challenge: to create signature looks from materials belonging to former Drag Race icons. Because Silky won the mini, she handed out the boxes to each of her competitors.

She provided A’Keria with Bebe Zahara Benet, Ariel with Laganja Estranja, Brooke with Detox, Honey with BenDeLaCreme, Kahanna with Katya, Mercedes with Bianca Del Rio, Nina with Thorgy Thor, Plastique with Sasha Velour, Ra’jah with Kennedy Davenport, Scarlet with Violet Chachki, Shuga with Sharon Needles, Soju with Kim Chi, Vanjie with Valentina and Yvie with Alaska. She chose Peppermint for herself.

While the queens prepared for their first runway, Miley Cyrus infiltrated the werkroom in disguise as a crew member called Barry Johnson, “aka BJ”, dressed in a cap, fake beard and glasses. It wasn’t the most impressive disguise… If there’s an Alias reboot, Miley ain’t taking over Jennifer Garner’s gig anytime soon. A’Keria, bless her, had no fucking clue as BJ assisted her with her mike, but Silky sussed her out instantly and proceeded to pull a Mimi Imfurst and run around the werkroom with Miley on her back, which wasn’t received well by Ariel, who called her out for trying to hijack screen time.

“When I’m nervous – I know it sounds cheesy – but seriously, breathe,” Miley told the queens, before revealing her secret, groundbreaking tactic to remaining calm: “You hold one side and you breathe through one side and you exhale through the other, because if you’re not breathing, you get into this panic state and you’re not yourself.”

She continued: “My godmother’s Dolly Parton, and something that I’ve learned from Dolly and the reason why people love her so much is that she’s always herself. What you wanna be is, like, beautiful. For me, as a fan at home, I fall in love with the personality. You all wouldn’t be here if you weren’t confident.” Shortly after, the contestants minced down the runway, with the main standouts being Brooke, Plastique, A’Keria and Vanjie, while Soju, Mercedes, Kahanna and Nina failed to impress. Ultimately, Brooke – the show’s first Canadian queen – won the challenge, while Soju and Kahanna fought it out in the first lip sync of the season to Miley/Hannah Montana’s classic pop anthem, Best of Both Worlds.

Kahanna made her drag mama Coco Montrese proud with her performance, providing us with kicks, backflips etc, and triumphed over Soju, who was told to sashay away. So… what did we think of the premiere? Who are we living for? Let us know in the comments…

The 11th season premiere of RuPaul’s Drag Race is now available to stream on Netflix UK.

Related: Aquaria hits out at Theresa May after she admits to not watching Drag Race.