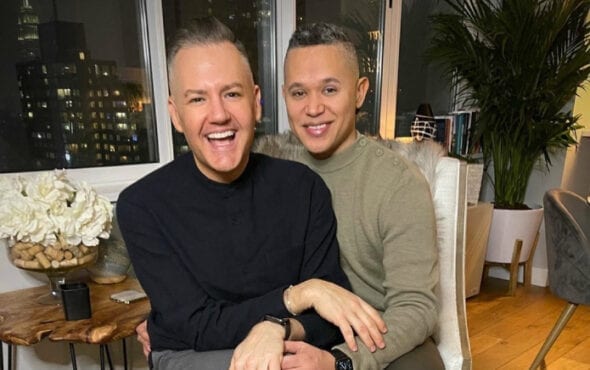 Condragulations are in order for Ross Mathews, who is officially off the market.

This week (23 February), the TV personality and Drag Race judge announced his engagement on social media to Dr. Wellington García.

“Fiancé, you stay! I am so proud to announce that after over a year together – navigating a pandemic, quarantine and opposite coasts – the smartest, funniest and kindest man I’ve ever met said, “Yes!”” wrote Ross.

Alongside an adorable photo with him and García wearing matching engagement rings, he added: “Dr. García, I love you. A lifetime of adventure awaits.”

During an appearance on The Drew Barrymore Show, Ross called his fiancé “hilarious” as well as “the smartest person” he’s ever met.

“Beyoncé says, ‘If you like it then you shoulda put a ring on it,’ well, I did!” he said, which was met with thunderous applause from the audience and party-popping antics from Drew. “I can’t believe it, I’m the happiest man.”

Ross also expanded on the origins of their relationship, saying they had to “date through quarantine” and get to know one another through Zoom dates before “eventually travelling, being together and making it work”.

“I’m just so happy,” he continued. “I’ve been so private about this relationship and it feels so weird because I tell you guys everything on my podcast and here on this show. So, I’m so happy to be sharing this with all of you.”