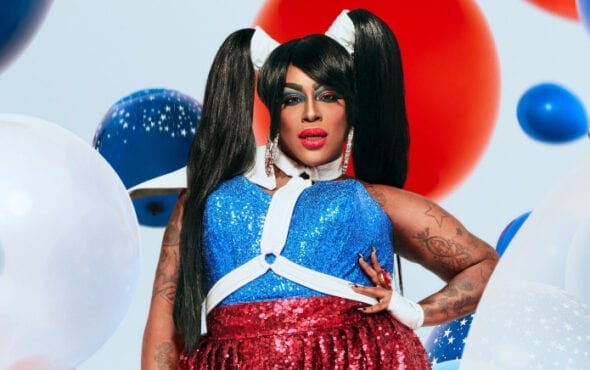 A petition has been launched in defence of Widow Von’Du’s recent arrest.

On Monday (31 May), the star was arrested and charged for alleged domestic violence against her boyfriend, who claimed she was upset when she returned to find him sleeping in her apartment without her consent. He also claimed that Widow knew he would be staying there.

The boyfriend told Kansas Police that Widow, who rose to fame last year as a contestant on RuPaul’s Drag Race, dragged him across the floor, pushed him into the bed, punched him four or five times and strangled him, rendering him unconscious.

Widow was subsequently booked on one count of domestic assault in the first degree and three counts in the second degree. On 2 June, the entertainer was released after paying $5000 of her $50,000 bail. She will reportedly appear in court on 7 June.

Meanwhile, Widow will be confined to house arrest, can’t contact the alleged victim and must not be in possession of any firearms.

A video has been circulating on Twitter of Widow being arrested by authorities, while sharing her version of events. In the clip she can be heard saying: “You’re taking me down because I was assaulted in my own apartment, as someone else would not understand that his privilege does not extend to my apartment.

Twitter immediately came to the defence of Widow, with one user explaining the “castle law state” of Missouri and how Widow has “the legal right to do whatever she deems fit to remove anyone disrupting the sanctity of her home.”

Missouri is a castle law state. She has the legal right to do whatever she deems fit to remove anyone disrupting the sanctity of her home. She was arrested for following the law. I feel like that needs to be the most important thing highlighted here. pic.twitter.com/gESIFwogvo

They added: “She was arrested for following the law. I feel like that needs to be the most important thing highlighted here.”

In protest of Widow’s arrest, fans of the star have launched a petition demanding her release. It states that Widow was “falsely accused of domestic violence when a former partner of hers would not leave her house she was forced to defend herself.”