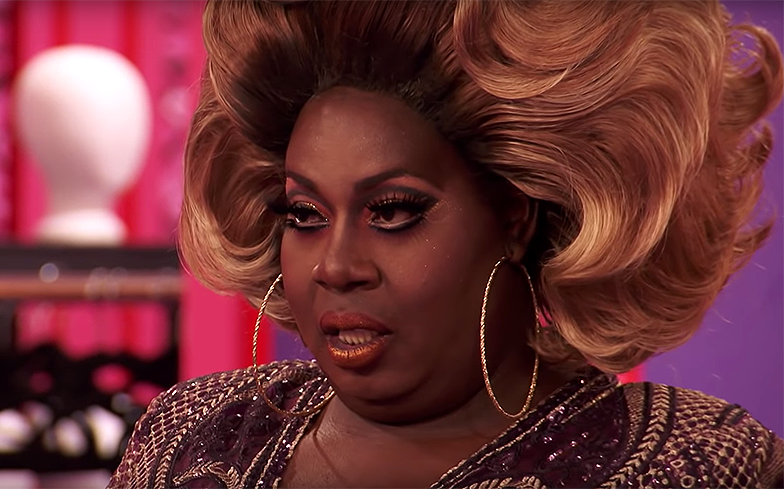 “Mystique was a mistake.”

The highly-anticipated fourth season of Drag Race All Stars 4 premiered last week and gave us life with so many gag-worthy moments, particularly Monét’s shady comments about season seven and nine, Farrah’s runway slip and Monique’s lip sync against Trinity The Tuck.

However, fans have noticed a specific moment from the episode that didn’t make the final cut, and honestly, it would’ve been one of the most epic reads in Drag Race HERstory.

Over the weekend, VH1 uploaded an extended look at the premiere’s reading challenge, and henny, there was one particular comment that left all Drag Race fans positively cooped, gooped, gagged, all that shit.

After season nine fan-favourite Valentina reads the other queens, she turns her attention to RuPaul – while pointing at Latrice Royale – and says: “Ru, Mystique was a mistake.”

Usually, when queens read other, they take it quite well don’t they? Latrice, however, looks genuinely slain by Valentina’s read, and takes a few moments to recover.

For those Drag Race “fans” who are unaware of Mystique, she was the legendary contestant on the show’s second season who provided us with one of the most iconic quotes ever: “I ain’t afraid to whoop your ass! I am from Chicago!”

Watch Latrice’s reaction from the extended reading challenge below.

Shortly after the video was uploaded, fans on Reddit wondered why the moment didn’t make the show. Check out the best reactions below.

LindyQLarue: Manila’s reaction makes it 10 times better. WHY DIDN’T THEY AIR THIS.

MikkoAngelo: Airing this read would’ve made Latrice’s read of Valentina so, so, so much more shadier.

apollo11341: You see the soul leave from her body for a second before coming back.

wyattmallard: These were much funnier than the ones actually aired!

kidddmayo: This needed to be aired. This was better than some other reads they had on.

martellrobinson: If they aired this then Latrice’s win would be called into question.

tuningproblem: this is one of the funniest reads ever and you made it even funnier I can’t stop watching it.

xandfan: The fact that they didn’t air this… the definition of homophobia. VH1, 2 HOUR EPISODES YOU JUNKIE WHORES!

Mrswearword: Valentina was savage as fuck and should’ve won the reading mini-challenge.

chewiethemajestic: Latrice looks like she’s ready to go back to prison, for murder this time.

The next episode of All Stars 4 will see the return of season three contestant, Stacy Layne Matthews, who will feature with the contestants in RuPaul’s brand new supergroup, Hennies. Living? Yes we are.