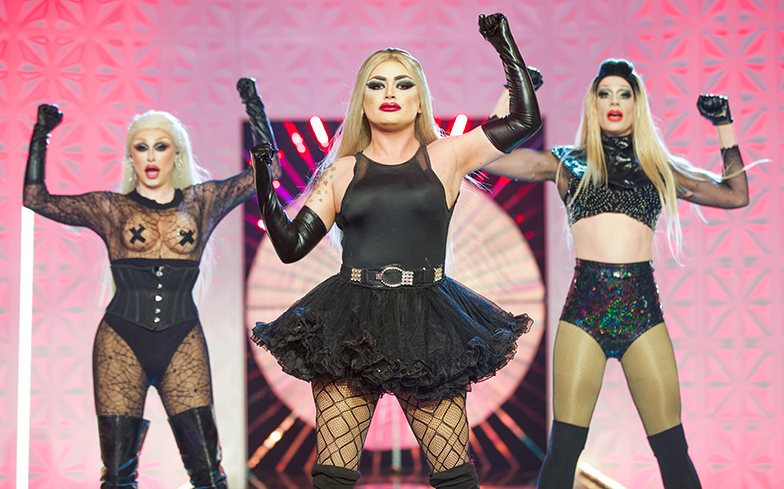 Fans have launched a petition for The Frock Destroyers to represent the UK at the 2020 Eurovision Song Contest.

On last week’s episode of RuPaul’s Drag Race UK, the six remaining contestants were split into two teams for an epic girl-group battle, aided by Grammy-nominated singer-songwriter and producer MNEK, while Jade Thirlwall made her judging debut.

The Frock Destroyers were ultimately awarded the win, with all three queens earning a rare, coveted RuPeter badge. Fans seemed to think they were the winning team too, because their version skyrocketed to number two on the UK iTunes chart.

And earlier today, the Official Charts revealed that the song was on track to debut at number 19 on the UK Singles Chart. If it actually manages to crack the top 20, it will be the most successful release from RuPaul’s Drag Race ever.

Fans have now created a petition campaigning for the Frock Destroyers to represent the UK and to showcase their charisma, uniqueness, nerve and talent at the Eurovision Song Contest. It has over 4000 signatures.

“The UK has long suffered dreadful entries that are not a true representation of our country, providing dreadful results,” it reads. “Because of Brexit the message has been that diversity and equality loses, let’s change that with Frock Destroyers.”

The UK hasn’t placed in the top ten of Eurovision since 2009. Would The Frock Destroyers catapult us back to the top ten, or perhaps become our first winning entry since 1997? If you’re on board, sign the petition here.

On next week’s Drag Race UK, the queens’ creative marketing skills are put to the test as they are asked to create an advert and brand themselves. Cheryl will make her Drag Race debut on the judging panel – see the first sickening images here.